PEP REVIEW: Posas is a dramatic condemnation of corruption in the Philippine police force 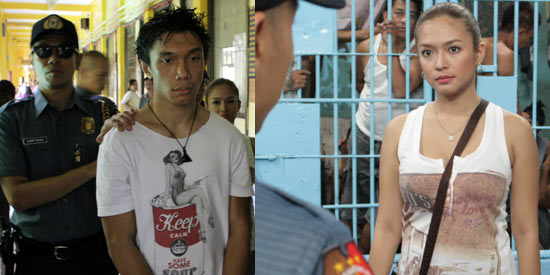 “To serve and protect.”

The moment this catchphrase emblazoned on a police car’s fender blankets the screen for a second time, it becomes easy to infer that an inferno of police anomalies will blaze on the screen. Director Lawrence Fajardo (Amok) forebodingly zooms in on the police organization’s slogan--even on a police precinct’s mission statement--in strategic sequences of the film.

Indeed, Posas (Shackled) is a dramatic condemnation of corruption in the Philippine police force. It exposes the shameful facets of the justice system by defining the depravity occurring at a lower echelon: a police station.

The cinematic illustration brings to the fore a young small-time thief, snatcher Jess Biag (Nico Antonio), and follows him from mid-morning to early evening of one life-changing day around which the hour-and-a-half movie spins.

Direk Lawrence introduces him--and, effectively, the plot--within the first few minutes of the movie interspersing Jess’ commission of a petty crime with city police officers’ (Jake Macapagal and Nor Domingo) execution of their daily grind.

Jess snatches the high-end cell phone of call center agent Grace Rosuello (Bangs Garcia), engages the arresting cops in a foot chase, is captured and tortured to confess to the crime.

Police Station Commander Inspector Domingo (Art Acuña) then designs Jess’ fate, deciding to utilize him as replacement for a slain “police asset.” The captain subjects the captive to an “initiation” during which the pivotal turn in the story comes to pass. The street-smart snatcher is all too aware of the disgusting realities in the underworld and the corrupt law enforcers’ nauseating perversion of justice. But the makers of Posas invite a personal peek into gangland and the people unwittingly and willingly dragged into that notorious and precarious world in this disturbing but morally engaging flick.

Devoid of cinematic extravagance, Posas relies heavily on the story and its ensemble cast to connect and convey its message. It successfully does just that with the help of a realistic screenplay (by Zig Dulay) and brilliant characterization. The policemen, including the desk officer (Hector Macaso), create the notion that they merely stepped out of an actual police station on invitation to join the cast. Acuña, with his strong screen presence, displays disgust towards Inspector Domingo whom he showers with glares and sneers so typical of power-intoxicated police officials.

The simplicity of the roles of Jake, Nor and Hector brings out acting so natural and convincing as they flirt with the physically arresting theft victim (Bangs), and assert their dominance over collared suspects, jail inmates and complainants. The same is true with Bangs who persuasively portrays the privileged class’ antipathy towards the obnoxious underprivileged and illiteracy on the ways of the world, “Hoy, ano yung Budol-Budol?”

Susan Africa who plays Jess’ mother credibly depicts the debatable helplessness of the deprived--tolerant of her son’s criminal activity and eager for a share of the loot, then lies and begs for mercy when he is taken into police custody. The challenging role falls on Nico who is incredibly believable as Jess. His gestures, gait and appearance typify the offenders that the police parade before the news media. He compellingly illustrates Jess’ differing manners: aggressive with his girlfriend (Wendy Valdez), assertive towards his victim, meek as a lamb in the presence of law enforcers and lawyers. Nico speaks with his eyes to subtly but powerfully express differing emotions: pleasure and pain, delight and fright, hope and hopelessness. He skillfully arouses loathing for being a crime perpetrator; then, pity for paradoxically turning into a victim.

A complainant (John Lapus) breaks the string of valid misery, injecting some comic relief with his report of a silly encounter with an old female member of the notorious Budol-Budol gang and his ridiculous hope for the perpetrator surfacing at the police station.

While the actors play on the audience’s emotions, the filmmakers challenge opinions. Do principal characters Jess, Inspector Domingo and Grace, or any one of them, deserve compassion? How about Jess’ mother or the Budol-Budoy gang prey? What is clear is that Posas has no random characters, no random scenes: each role, each sequence completes the absorbing story.

Direk Lawrence does away with the stretched action edict that guides many movies. The sickening torture and “initiation” scenes are brief but effectively pose lingering emotional and psychological challenges. He understandably slows down the action in some scenes to prepare the audience for the climax. He spices up the storytelling with stimulating visual contrasts and symbolisms.

The director draws distinction between the expanse of Jess’ dwelling under theJonesBridge and the cramped cell that he is thrown into after confessing to his crime. He puts Grace in the foreground of the Quiapo Church as she reports Jess’ transgression to PO2 Santiago (Jake). The opening scene shows PO1 Damian (n) fixing a tire of a police car, insinuating a wrecked police organization that needs repair. A scene inside the police station shows policemen watching a telecast of Chief Justice Renato Corona’s impeachment trial, suggesting that the fangs of depravity extend way up above the police station level. The post-inquest scene--where Inspector Domingo cunningly convinces Grace to drop her complaint against Jess--shows the darkening sky hovering above the main characters. The dusk announced by the heavens declares the imminent end of Jess’ life as a petty criminal and the beginning of his journey in the darker recesses of the underworld.

Posas skips exhaustive narrative for cerebral stimulation. The movie is targeted for those who need to comprehend the making of a hardcore criminal. It is an antidote to ignorance of the state of affairs at the grass roots.

Direk Lawrence defines the narrative’s ending with a meaningful last frame. The viewers, shackled by depressing truths for an hour-and-half, can find liberation in making their own conclusion of what transpires after that final shot.


Posas is one of the 5 entries competing in the Directors' Showcase category of the 8th edition of Cinemalaya. It will be screened at the Cultural Center of the Philippines, Greenbelt 3 and Trinoma until July 29, 2012.


(CLICK HERE to read all about this year’s competing entries)