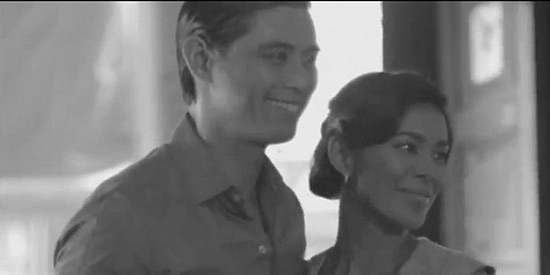 Angel Aquino and Richard Quan were chosen as the lead stars in 1945, a black-and-white short film that depicts the enduring power of love.

1945 is one of the 5 short films included in the SUN SHORTS digital collection presented by Sun Life Financial-Philippines (SLFP).

This period short film is directed by Jun Reyes, who previously helmed the documentary The Last Journey of Ninoy (1999).

Viewers get to hear the emotion-laden voice of Angel as she reads a letter addressed to her beloved Enciong.

In such a short time, viewers will get to see the horrific impact of war on a regular family. Their lives were shattered when the Kempeitai take away her husband Enciong.

In one particularly cinematic scene, Angel's character drops a bucket of paint. The vivid red color of the paint is the only spot of color in an otherwise black-and-white short film.

Violent sobs rack Angel's body as she gives way to her grief as she loses hope of ever seeing her husband again.

A few months later, a messenger brings the dreaded letter confirming that Enciong has indeed passed away.

In this scene, Angel gives a nuanced performance that shifts from grief to gratitude. The grateful smile of Angel's character reflects her joy over the fact that her husband continues to provide for them even beyond the grave.

Master storyteller Jun Reyes manages to impart a message of hope without turning it into a hard-sell.

What makes his short film even more powerful is the fact that 1945 is inspired by the real-life struggle of a war-torn family.

In addition, Angel's moving performance of a wife and mother trying to survive the darkness of war makes 1945 a must-see.

Following the release of 1945 are the other short films that shall be shown online every two weeks.