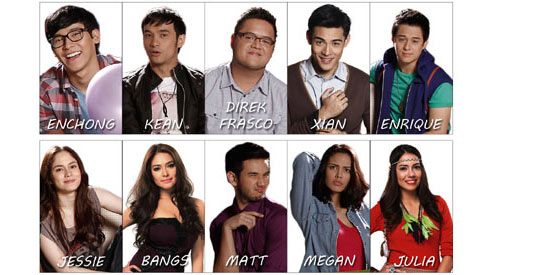 In Star Cinema's The Reunion, four young men must find a resolution for past self-made mishaps so that they may fix their stormy future.

As its title suggests, this movie is about a group of high school friends who get together for a reunion. While their former classmates have reached professional fulfillment, the four of them remain in a state of desperation.

When they get kicked out of their high school reunion after picking a fight with the wealthiest attendees, they realize that their lives are not turning out well. And they point to mistakes they made as teenagers as their stumbling block.

Their flawed decisions had prompted their past girlfriends to leave them. Feeling that reconnecting with the women will finally fix their lives, they go on a journey to find their former flames.

The Reunion is being touted as a tribute movie to the Eraserheads, a landmark Filipino rock band in the ‘90s.

The movie contains references to the group's popular songs. The most noticeable are the names of the ex-girlfriends: Toyang (Megan Young), Ligaya (Julia Montes), and Shirley (Bangs Garcia).

Several Eraserheads songs are also used throughout the movie, both as soundtrack and as direct material for the plot. These include the band's hit songs “Ang Huling El Bimbo,” “Overdrive,” “Alapaap” and “Ligaya.”

But what's surprising is that The Reunion lacks rhythm, even if it's inspired by good music.

By showcasing the stories of four people over a short running time, narrative cohesion is sacrificed. The film's first half feels frenetic and wildly put together, while the second half obviously slows down to make way for sentimentality.

The cacophony of stories results in varying levels of success in the storytelling.

Among the four, the story where Kean Cipriano and Bangs Garcia appear feels most authentic. The two find themselves in a literal interpretation of the Eraserheads song "Magasin."

The enthusiastic performances of the young cast make this movie a treat for fans of ABS-CBN stars.

The women walk all over the men in the acting department, with Jessy Mendiola, Cristine Reyes, Julia Montes, and Bangs Garcia leading the charge.

Jessy Mendiola gives a more-than-believable portrayal of a young woman irrationally placed in the “friend zone.”

In her scene towards the end of the movie, Cristine Reyes shows commendable acting chops by nailing a look of glee, confusion, and mild disinterest.

And the look of pain on Julia Montes's face after a major accident feels realistic.

But it is Bangs Garcia who turns in the best performance, as a conservative woman who transforms into a male-magazine cover girl, after her boyfriend leaves her for being too "manang." In the high school scenes, Bangs carries a naïveté that's needed to pull it all off.

After giving exceptional performances in the Cinemalaya 2012 movie Posas and in Star Cinema's The Reunion, Bangs proves herself deserving of meatier roles in the future.

Among the boys, Kean Cipriano and Enchong Dee give the best performances.

Viewers should also watch for the cameos from the ever-great Ronnie Lazaro and the equally ever-great Gina Pareño.

Graded B by the Cinema Evaluation Board, The Reunion is now showing in cinemas nationwide.