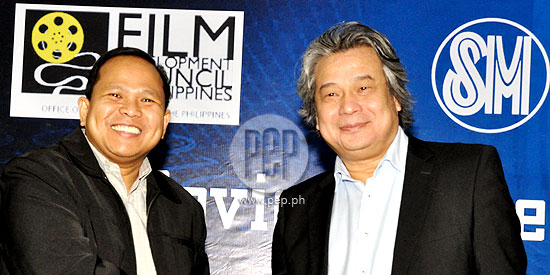 Film Development Council of the Philippines chairman Briccio Santos (right) says that the FDCP’s partnership with SM Cinema came at “an opportune time with the digital revolution changing the way we make films, watch, and preserve films.” Also present at the contract signing was SM Cinemas senior vice president Edgar Tejerero (left). SM Cinema is now converting all of its 240 cinemas nationwide into digital screening, bidding the 35mm projector goodbye.

A signing of a memorandum of agreement between the Film Development Council of the Philippines (FDCP) and SM Cinema last August 29 at the 3rd floor of the Mall of Asia Arena marked a milestone in Philippine cinema.

SM Cinema, which operates 240 movie houses in its 44 branches nationwide, has made a move to convert its theatres to digital under the Virtual Print Fee (VPF) program.

There are currently 600 cinemas in operation in the country.

In the Philippines, DCinema handles the deployment of the VPF— a financing mechanism that assists in the purchase of digital cinema equipment, allowing distributors to spend less in shipping digital rather than 35mm film, and recouping a portion of equipment costs.

“By September 14, 2012, SM Cinema will already have one hundred percent of all its screen in digital… It will signal for us the end of the 35mm,” announced Edgar Tejerero, senior vice president for West Avenue Theatres Corporation, operator of SM Cinemas.

Tejerero also relayed that SM Cinema’s signing of the agreement also means it is supporting the Cinematheque Project of the FDCP.

The Cinematheque project is part of the FDCP’s Sineng Pambansa program, which brings independent and mainstream films closer to Filipinos in Davao, Marawi, Iloilo, and Baguio.

With SM Cinema committing to help in carrying out the project, Tejerero said that any contemporary, classic, or independent film that go through the FDCP will have the opportunity to be screened in a cinema house in any SM Cinema branch.

Added Tejerero, “With the age of digital, we can guarantee that what is shown in Metro Manila can be shown in any part of the country.”

Meanwhile, FDCP chairman Briccio Santos said, “This partnership came in an opportune time with the digital revolution changing the way we make, watch, and preserve films. Digital filmmaking has paved a way for independent filmmakers to democratize the medium and because of this, Philippine cinema is prolific again.”

Santos also pointed out that the costly and laborious task of film exhibition will no longer be shouldered by producers and distributors. Instead, the new system will permit them to distribute films more efficiently.

“The system of film distribution will be revolutionized and the possibilities are endless,” said the head of the FDCP.

The full digitalization of cinemas promises likewise to prevent the rampant piracy in the country.

This is made possible by tighter copy protection, as the distribution of unauthorized copies prior to local and world premieres will be avoided, because the interception of prints will not happen anymore.

NEW R-16 CLASSIFICATION. SM Cinema announced during the contract signing that it will support the Movie and Television Review and Classification Board’s (MTRCB) inclusion of an R-16 rating in its classification system.

After keeping mum on the issue since the MTRCB announced the possibility of revising its classification system last May, SM Cinema broke its silence on matter during the press conference.

SM will continue to ban R-18 movies in its cinemas— a policy that has been implemented for the past 10 years, purportedly to uphold its principle of showing only wholesome and family-oriented entertainment.

However, now the Henry Sy-owned cinema chain is open to showing films that have been given the R-16 rating by the MTRCB.

Tejerero announced that day: "We have decided to support this new rating system of the MTRCB and will promptly inform Chairman Grace Poe-Llamanzares about it.”

Prior to the introduction of the R-16 rating, the R-13 classification has become the default classification for movies with scenes meant for the viewing of an older audience. As a result, cuts are done on the films in order to accommodate teenagers.

Last July, PEP.ph (Philippine Entertainment Portal) already reported that the Cinemalaya entry, The Animals, is the first film to receive the R-16 rating from the MTRCB.

Starring Albie Casiño and Dawn Balagot, this film depicts drug use and a rape scene. This movie was helmed by newbie director Gino Santos.