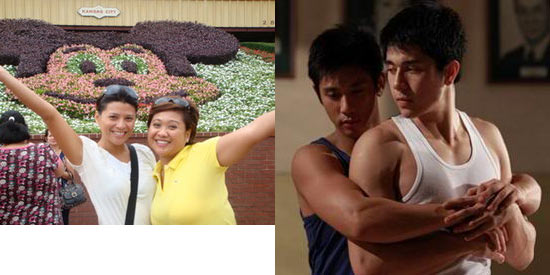 The Cinemalaya entries 100 (left frame) and Sayaw ng Dalawang Kaliwang Paa will be screened as part of an outreach tour called Cinemalaya Goes To Central Luzon. 100 stars Mylene Dizon and Eugene Domingo while Ang Sayaw... is topbilled by Rocco Nacino and Paulo Avelino.

"The outreach tour will feature Cinemalaya films produced during the eight years of Cinemalaya.

"The line-up for the other areas are still being finalized with the partner institutions and local government units.

"Cinemalaya filmmakers and actors will be on hand to discuss their films with the audience.

"Students from local colleges and high schools and as well as the general public are expected to attend the Cinemalaya outreach events.

"Cinemalaya Goes To Central Luzon starts on September 27, 2012 at the Urdaneta Sports and Cultural Center in Urdaneta City, Pangasinan, with the Office of the City Mayor Amadeo Perez as local partner. An opening ceremony is scheduled at 8AM to be followed by the screening of the films. Screening schedule is as follows: 8:30-11:00 AM for Ang Pagdadalaga ni Maximo Oliveros, 1:00 PM-3:00PM for Dinig Sana Kita; 4:00PM-6:00PM for Last Supper No. 3.

Cinemalaya partners with Lyceum of Subic Bay in Olongapo City on September 28, 2012. To be shown at the school’s AV Room are Dinig Sana Kita at 8-11AM; 100 at 1-3PM and Sayaw ng Dalawang Kaliwang Paa at 4-6PM.

"Cinemalaya goes to the Bulwagan of the Tarlac Provincial Capitol in Tarlac City, on October 12, 2012, with the Office of the City Mayor Pearl Pacada as local partner. Screening schedule: 8:00-11:00AM for Last Supper No. 3; 1-3PM for Dinig Sana Kita; and 4-6PM for Brutus.