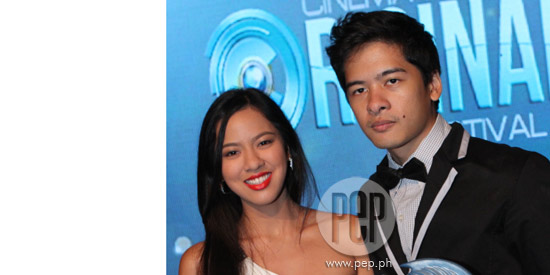 Scions of award-winning actors dominated the top acting awards at the Cinema One Originals Festival 2012.

The winners were announced tonight, December 3, at ABS-CBN's Dolphy Theater in Quezon City.

Winners of the top acting awards were Mara Lopez and Alex Medina, who played a couple in Ato Bautista's Palitan, a sex-drama.

When Mara accepted the award onstage, she immediately thanked her parents for allowing her to accept the risky role.

Upon hearing this, her mother Maria Isabel, who was in the audience, shouted, "Like mother, like daughter!"

Mara's screen partner Alex Medina, on the other hand, is the youngest son of character actor Pen Medina.

Alex was speechless when he accepted his award. He asked the audience, "Totoo ba 'to?"

In his acceptance speech, the award-winning filmmaker encouraged the directors in the venue.

He also told the directors who did not win not to lose heart.

He said the winning films are not the best films but just the films that capture the current zeitgeist.

Hosts of the awards night were Matteo Guidicelli and Megan Young.

Here is the list of winners at the CinemaOne Originals Festival 2012: