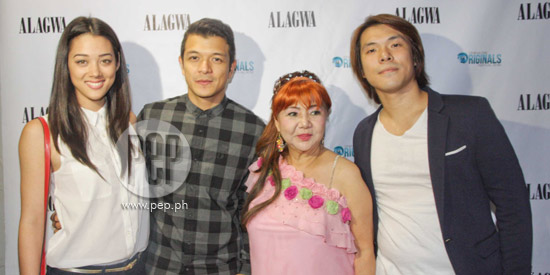 Everything is looking up for Jericho Rosales. He has an internationally well received film in Alagwa (international title: Breakaway) and is spending Christmas with his steady girlfriend, Kim Jones.


Alagwa, written and directed by Ian Loreños, had its Philippine premiere at Shang Cineplex as part of the Cinema One Film festival last December 2.


The storyline revolves around a struggling father Robert (played by Jericho) who has difficulty seeing the real emotional need of his son. The film depicts a modus operandi wherein kids are being used to lure younger children and kidnap them for human trafficking. Bugoy Cariño of E-Boy fame plays Echo’s young son Brian.

Echo (Jericho’s nickname) is the lead actor and also a co-producer of this film, which was well received at the 2012 Busan Film Festival in South Korea. That was where Cinema One head Ronald Arguelles saw the film and invited it for the 8th Cinema One Originals Film Fest held in Shang Plaza and Robinson’s Galleria.


A review by The Hollywood Reporter described Alagwa as a “low-budget standout.”


The said review also stated: “Nagging, brusque and hyper-critical, Rosales expertly conveys the over-compensation of the single parent in the tough love Robert shows his son.”

Echo and Kim were always by each other’s side and holding hands throughout the screening. She also accompanied Echo during the Busan screening of the film early November. Kim said of Alagwa, “I think it’s the best movie he’s done and I told him so.”

The ABS-CBN actor realizes the importance of film festivals to show Filipino talent. “I’m very thankful kay Ronald [Arguelles] at sa lahat ng bumubuo ng Cinema One. Thank you for inviting us to be part of this wonderful festival. I’m so happy may ganito tayong festival. I’m sure maraming pelikula na sinali dito na every Filipino will be proud of.”


Alagwa was shot in the gritty streets of Quiapo, Binondo and also Hong Kong. It also features Malaysian actress Carmen Soo, who is cast as the kind daughter of Robert’s boss. Other cast members include Smokey Manaloto, Leo Martinez, Nanette Inventor and Jeremiah Rosales. Dancer / performer Gabby Valenciano was the musical scorer for the film. Gabby has previously worked with Echo as his musical arranger on a few of his songs.

According to Echo, when he read the script, he became convinced to do the project and even become involved in its production. “Nung nabasa ko yung script na move ako kaagad. Sinulat ‘to for a cause. Number one, it’s about a father and a son. Number two, [it tackles] human trafficking, Very simple but powerful script. After reading Page 5, I immediately said yes to the movie. Bihira yung pelikula sa ‘kin na ganun yung effect sa ‘kin, e. They asked me if I wanted to co-produce the film. I said. ‘game let’s do it.’”


Benito Bautista, whom Echo met in Busan, is also screening his award-winning film Boundary until December 11 at the Shang Cineplex.

For Echo it was important to get the message of the film to more Filipinos. “It’s an eye opener against human trafficking. The lesson here is sa sobrang kahirapan na o-overlook natin mga bagay na impurtante. This movie shows that di talaga importante ang salapi. In the end, what’s really important is your family, friends.”