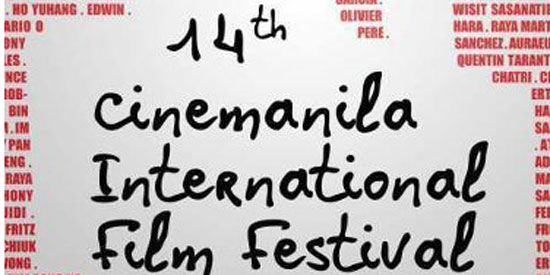 "I'm happy. I'm glad to be here tonight, because the filmmakers are here."


This was Founding Director Tikoy Aguiluz's welcoming statement to the directors who attended the awards night of the 14th Cinemanila International Film Festival on Saturday, December 8, at Bonifacio High Street in Taguig City.


Cinemanila is an annual film festival that offers the best movies from
around the world. It also holds a competition for local indie filmmakers in the country.


According to Direk Tikoy, these directors submitted their movies to Cinemanila even if they do not give grants or cash prizes. "I'd really have to hand it out to the filmmakers who are here tonight, because we've never offered any grant, we've never offered any P500,000 subsidy, we do not give any cash prizes. But they made the films, and they submitted the films to Cinemanila," he said.


The respected director added that the submitted films are in line with Cinemanila's mission. "What we've always wanted to do was show good films. We've stuck with that crazy idea of promoting and showing good films. Whether there's an audience or not, we never cared. We always thought if you show the films, the audience will come," Direk Tikoy said.


ENTRIES. There were three categories in in Cinemanila's competition section. The first one is Young Cinema Shorts in Competition for budding young filmmakers. The second is the International Competition for the world's best full-length movies. The last is Digital Lokal for full-length Filipino independent movies.


Eight movies were competing in the International Competition category: 36 by Nawopol Thamrongratanarit, Flashback Memories 3D by Tetsuaki Matsue, The Great Cinema Party by Raya Martin, Juvenile Offender by Kang Yi-kwan, Kayan by Maryam Najafi, Television by Mostofa Sarwar Farooki, Post Tenebras Lux by Carlos Reygadas, and If Not Now, Then When? by James Lee.


WINNERS. Two awards were given in the Young Cinema Shorts Competition category.


Five awards were given in the International Competition category. Korean director Kang Yi-kwan's Juvenile Offender took home two awards: the Lino Brocka Grand Prize, and Best Actor for it's lead, Seo Young-Ju. Juvenile Offender is about a troubled young man who meets his mother, who disappeared years ago.Director Kang Yi-Kwan was present to receive both awards. "I love Manila," he told the audience.


The International Competition Jury Prize went to If Not Now, Then When? by James Lee from Malaysia.


In Teng's acceptance speech, he offered his award to the people of Mindanao who have just survived the battering of Typhoon Pablo.
"Their resilience, bravery, and fortitude were tested in the storm,"
the director said.


Another award in Digital Lokal went to Davao's Arnel Mardoquio for Ang Paglalakbay ng mga Bituin sa Gabing Madilim, which is about the Bangsamoro struggle. The movie won the Jury Prize.


Here is the list of winners in the 14th Cinemanila: