THE PEP LIST: FILMS YOU SHOULDN'T HAVE MISSED IN 2012 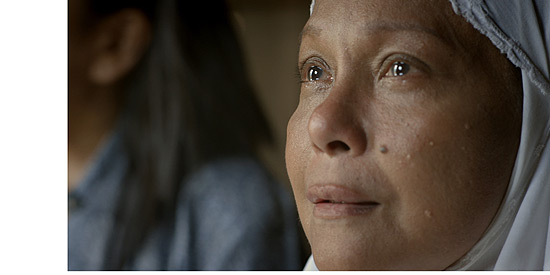 Watching Nora Aunor perform with her famous expressive eyes in Thy Womb is well worth the price of a movie ticket to this year’s Metro Manila Film Festival.

By all accounts, the year 2012 produced a bumper crop of noteworthy Filipino films.

As the year comes to a close, PEP.ph (Philippine Entertainment Portal) presents the locally produced films that have left an indelible mark on audiences.

These films were chosen for their out-of-the-box plots and treatment that make them a cut above the rest.

Here are the films that all deserved the moviegoers’ attention this 2012 (in alphabetical order):

Aside from these noteworthy movies, the documentary Give Up Tomorrow also makes it to this list.

Give Up Tomorrow is a compelling look into the plight of Paco Larrañaga, the great-grandson of the late President Sergio Osmeña Sr., who is wrongly accused of murder—and all because he fits the "profile" created by society's biases.

Four hundred hours of footage were whittled down to a 90-minute documentary that traces the arrest, trial, and incarceration of Paco and seven other men convicted of the rape and murder of Marijoy and Jacqueline Chiong in July 1997.

What films do you think deserve to be called must-see movies in 2012? Feel free to create your own list in the comments section below.

Alban (Assunta de Rossi) and Alba (Alessandra de Rossi) are half-sisters who were separated when they were still young kids.

Alban grows up in their native Palawan, while Alba is raised by her Canadian father. When the younger sister returns to her homeland, Alba rediscovers the Alibata, the ancient writing system in pre-colonial Philippines.

The ancient script becomes their way to communicate with Bagtik, the deaf-mute childhood friend whom both sisters fell in love with. Bagtik (played by newbie actor Adrian Sebastian) uses the semi-naked bodies of the sisters as a canvas for the Alibata.

Baybayin (international title: The Palawan Script) is impressive, not only for its artistic and visual loveliness that captures the beauty of Palawan, but most importantly for showing that love can blossom even in silence.

Produced by Cinemalaya and Octobertrain Films

Graded A by the Cinema Evaluation Board

Can Bwakaw earn for the Philippines its very first Oscar nomination?

Unfortunately, the Academy Awards did not select this drama-comedy as one of the five shortlisted entries in the Best Foreign Language Film category.

Last December 6, The New York Times published a story about Bwakaw on its awards season blog called The Carpetbagger. The article was titled “A Coming-Out Story starring the Filipino Clint Eastwood.”

Eddie Garcia topbills this movie, along with Princess, his canine co-star who is half golden retriever/half Aspin (Asong Pinoy).

At the start, Rene is a grumpy loner who has a tendency to be harsh towards people. His outlook in life turns around when he cares for a stray dog that he names Bwakaw (Tagalog slang for greedy or gluttonous).

Despite the seemingly detestable behavior of the protagonist, moviegoers and critics (both here and abroad) have embraced Rene as he rediscovers his passion for life.

A gripping look at the high cost of freedom.

Captive depicts the harrowing experience of being kidnapped by extremists.

A member of the Cinema Evaluation Board described Captive as “a compelling and poignant depiction of the plight of the Palawan hostages and a revealing commentary on the incompetence of the government to cope with serious terrorist threats.”

Based on the true-life Dos Palmas kidnappings by the Abu Sayyaf in 2001, this movie is shot documentary-style, allowing moviegoers to fully absorb the horrors of being in a war zone.

Therese (portrayed by French actress Isabelle Huppert) is one of the victims made to endure a long voyage at sea and forced to trudge through a forest while dodging bullets during military skirmishes.

During her 377-day ordeal, Therese befriends Hamed, a young boy tasked by the Abu Sayyaf to guard the social worker.

Through this film, Direk Brillante juxtaposes the differences between the Christian and Muslim faiths and also showcases an unusual bond between kidnapper and victim (Stockholm syndrome).

There are also many pulse-pounding scenes brought about by gunfire and explosions, as well as violent sequences such as the decapitation of a soldier.

Captive is a must-see for the realistic performances of the actors that add to the authenticity of the film.

Not many movie musicals are produced in the Philippines, which is why it is commendable for Unitel to bankroll this ambitious project that took five years to complete.

I Do Bidoo Bidoo is basically a Pinoy love story woven together through the soundtrack of APO Hiking Society songs.

The musical isn’t just concerned with romantic love but familial love as well.

Sam Concepcion and Tippy Dos Santos portray a young couple who must deal with teenage pregnancy.

Their relationship is put to the test when the traditional pamamanhikan (rites of engagement) becomes a musical standoff between the two families who belong to different social classes.

On one side of the family feud are Gary Valenciano and Zsa Zsa Padilla (as the wealthy Fuentebellas), while on the other side are Ogie Alcasid and Eugene Domingo (as the not-so-wealthy Polotans).

The result is a highly entertaining movie musical that manages to make select APO hits as integral to the storytelling as the spoken lines.

Produced by Film Development Council of the Philippines.

In Sigfreid Barros-Sanchez's Ang Mga Kidnaper ni Ronnie Lazaro, most-sought–after indie actor Ronnie Lazaro meets up with his biggest fans, who end up kidnapping him so that he can star in their movie.

This comedy, which recognizes the obstacles in indie filmmaking, won the Grand Jury prize at the 1st Sineng Pambansa Film Competition.

Produced by Cinemalaya and Largavista Productions.

Your closest friends have the potential to be your most vicious enemies.

This is the premise of the Cinemalaya entry Mga Mumunting Lihim. Mariel (Judy Ann Santos) and Carla (Iza Calzado) have been best friends since high school. When they grow up, Mariel opts to become a housewife, while Carla becomes a career-driven woman.

Jealousy and resentment prompt Mariel to write down her thoughts in a diary that later triggers a huge fight among their friends, played by Agot Isidro and Janice de Belen.

Judy Ann Santos breaks out of the mold of the hapless victim to play a scheming woman.

Powerful performances by Judy Ann and Iza drive this nuanced drama that explores the boundaries of friendship.

At the height of their quarrel, Janice de Belen’s character gives the dirty finger to Agot Isidro. The girls also swear and curse with abandon.

It is surprising, and welcome, to see mainstream actresses take on these roles without thought to their "image."

A graphic reminder that the cycle of life and death must be respected.

The Healing is the first Filipino film given two classifications by the Movie and Television Review and Classification Board (MTRCB): R-13 and R-18.

The movie tackles the Filipino tradition of faith healing and the consequences of tapping this alternative form of therapy.

Doppelgängers (German for “double walker”) figure prominently in this film as they serve as omens of death.

It is interesting to see Vilma Santos, Kim Chiu, and other cast members battle with the paranormal evil doubles of themselves.

The death scenes are executed with vivid violence and a copious amount of blood.

As such, this horror-suspense film offers some of the most graphic and violent scenes among local films in recent memory.

An infertile midwife makes a grand sacrifice in this colorful lyrical ode to Tawi-Tawi.

Produced by Centerstage Productions in association with the Film Development Council of the Philippines.

Nora Aunor reaffirms her status as the Superstar of Philippine movies through her outstanding performance in the internationally-acclaimed film, Thy Womb.

An infertile midwife (Nora) actively seeks out a second wife who will bear a child for her husband (Bembol Roco), whom she loves dearly.

Poignant and moving, this film is a story of selfless love as much as it is a lyrical ode to Tawi-Tawi.

As PEP.ph’s review of Thy Womb points out, Brillante is able to weave the personal (one’s notion of selfless love, joy, sadness) with the cultural (how one’s actions, choices, thoughts are dictated by society) and the national (Tawi-Tawi’s socio-political setting).

Watching La Aunor perform with her famous expressive eyes is well worth the price of a movie ticket to this year’s Metro Manila Film Festival.

(CLICK HERE to read PEP.ph’s review of Thy Womb)

A technically excellent addition to films that tackle aswang folklore.

Graded B by the Cinema Evaluation Board.

In Tiktik: the Aswang Chronicles, more than 70 Filipino artists labored for 12 months to complete the computer-generated images (CGI) and post-production work needed for the movie, which boasts of being the first to completely embrace green screen technology.

As a result, moviegoers are offered stunning visuals and graphic novel-inspired backgrounds that are proudly Pinoy made. In terms of visual and technical proficiency, Tiktik is a stand-out film that sets the bar high.

As the characters struggle to survive the assault of an army of aswangs, distinct Pinoy humor alleviates the grimness of the situation. However, this is also where the film hits a snag.

In Tiktik, the director errs on the side of too much at the wrong moments.

Especially in the climatic scenes, when the assault of the aswangs is overwhelming, when their numbers have grown and their visciousness has become more pronounced, when victory is almost certainly theirs, the director has no business putting in an unbelievable scene where the three males guarding the females sit on a couch, cozy up to each other, and say their goodbyes.

The male bonding elicits laughs, which would not be wrong in itself. But the laughs come with agitated screams from the audience: "Will you stop it already! The girls and the baby are upstairs, in great danger of being eaten alive!"

Still, if only for the CGI and the great intentions of the producers, this film is a good ride.