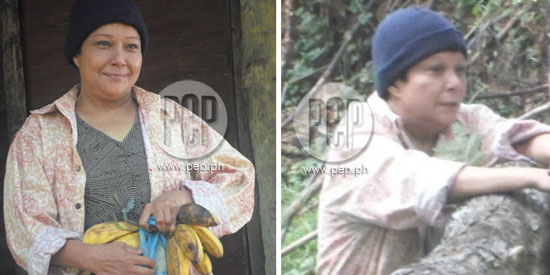 In Ang Kwento ni Mabuti, Nora Aunor shows that she has truly mastered the art of acting, not only with her eyes or facial expressions but even with her gestures and gait.

From the rural landscapes to the computer generated images to the very treatment of the story, Ang Kwento Ni Mabuti reminds me of Zhang Yimou’s films. Not the big, action flicks that like Hero or House of Flying Daggers, but the more quiet, thoughtful ones like Not One Less and The Road Home.

Set in a rural, mountain village in Nueva Vizcaya, the film directed by Mes de Guzman is entirely in Ilocano. Nora Aunor plays the title character who is a farmer, a mother, and a grandmother. She lives with her ailing mother as well as her four granddaughters, while her children are away, working in other parts of the country. Theirs is a very feminist household. In their village hut, everything is right in the world, despite conditions being far from the norm.

The film opens with what seems like a painting of a rural landscape. But it is a scene of daily life with neighbors passing each other on the mountain pass as they go about their business. They exchange greetings, then go on their own. Yet, there is something brewing that keeps us wondering until we go back to the same scene later.

Despite the seemingly romantic countryside, cracks on the surface are slowly revealed as, not surprisingly, there are many financial problems that Mabuti tries to keep to herself and manage on her own. Not only is she a pillar for her family but also the village. A local hilot (village healer), various men and women come to her to ease afflictions. She helps without asking for payment in return. Overall, she is a person who lives up to her name, seemingly beyond reproach.

Yet, de Guzman’s film does not subjugate rural life to city life. In fact, the cinematography highlights the lush beauty of the mountainside as opposed to the dirty streets of the city; the serenity of the village vis-à-vis the confusion of the provincial capital. When Mabuti ventures to Bambang to find redress, she instead brings back with her conflict. The film also touches on rebellion and crime that shatters their very delicate existence.

Mabuti suffers a crisis of conscience after she comes upon a bag of money—millions of pesos, at that. She is torn between surrendering it to the authorities and using it to solve the problems that her family faces. Every painful step, the audience takes with her.

The setting and elements of nature are also characters in the movie. It may be a revelation to audiences in the city about just how difficult daily commute can be for people who live in the villages: from long, precarious paths to jeepneys and buses breaking down.

Mabuti is the Everyman, making ends meet and subsisting in a world that is ever-changing and somehow, she cannot keep up.

The character of the village captain exudes a caring, benevolent persona. However, behind closed doors, we find out that he runs the local illegal gambling operation. Also behind closed doors, the elderly women, Mabuti and her mother, hide their discussions about what to do with the money.

Nora Aunor is flawless as the lead character. It is in the quiet moments without dialogue that her face reflects, at different times: joy, anguish, masked frustration, and utter pain on her face. She has truly mastered the art of acting, not only with her eyes or facial expressions but even with her gestures and gait.

Arnold Reyes, as Mabuti’s wayward son, admirably avoids playing a stereotype. Mara Lopez shows a depth beyond her youth as a single mother who yearns for love. Sue Prado as the desperate mother Nelia is haunting. So much so that despite her limited time onscreen, she leaves an indelible mark until the end. Ronald Caranza, as the source of comic relief, displays excellent comic timing. Ama Quaimbao’s single scene will live in memory as her last film, and she is resplendent in her cameo.

The revelations in Ang Kwento ni Mabuti are so low-key that if you blink, you might miss them. The characters are well-rounded, despite not delving on each one’s history, we understand their motivations and their actions. We empathize with their plight because they are common people.

Belief in fate and signs, more prevalent as they are in the countryside, also figure in the film. From mist to rain, swarms of insects, sunshine, and other natural occurrences that some may say are coincidences, but to which ancient wisdom will give more credence.

By the end of the story, it is indeed difficult not to believe in fate, as it certainly directs the lives of Mabuti and her family.

Ang Kwento ni Mabuti is one of the entries in the 1st CineFilipino Film Festival, which runs until September 24, 2013. Moviegoers can watch at Newport Cinemas at Resorts World Manila, Lucky Chinatown Mall and Gateway Cineplex. Entries will also be screened at the Shang Cineplex, Shangri-la Plaza Mall from September 21-22.


(To learn more about the CineFilipino entries, CLICK HERE)


UPDATE: Ang Kwento ni Mabuti will have an extended run in Gateway and Ali Mall cinemas for another week starting Wednesday, September 25, 2013.