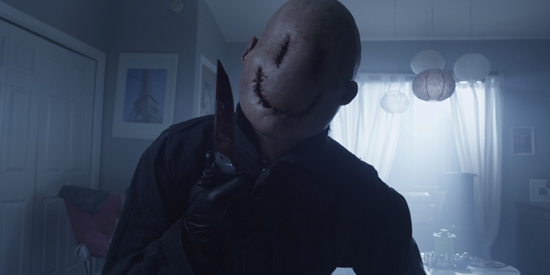 The movie stars Caitlin Gerard (The Social Network) who plays Ashley, a young woman convinced that the urban legend Smiley— a murderous maniac who can be summoned from the Internet—is no more than a myth.

The film follows the story of Ashley, a college freshman who’s starting to adjust after her mother's recent death. She moves in with Proxy (Melanie Papalia) who starts influencing her in attending wild college parties. In one of the parties, Ashley meets a computer geek named Binder (Shane Dawson) and Zane (Andrew James Allen), Proxy’s love interest.

Ashley learns about the urban legend revolving around Smiley, a demented online killer who mysteriously appears and kills his victims when someone types in "It's all about the lulz" three times on a video chat.

Out of curiosity, Ashley and Proxy try to prove if the urban legend is true. They go online the very next day and type, "It's all about the lulz" three times on a video chat with a random user.

Much to their surprise, the two girls witness how Smiley appears instantly and murders their chat mate. However horrified, the girls decide not to report the incident to the police.

With curiosity getting the better of her, Ashley finds herself drawn more and more into investigating Smiley's perplexing identity and modus operandi. As the days pass, her inquisitiveness slowly turns into paranoia. The killer seeps into her subconscious, giving her the worst of her nightmares.

Towards the end of the film, Proxy calls and asks Ashley to check on Zane because they were supposed to meet online for a video chat. In a fit of panic, Ashley rushes off to Zane’s house and finds his lifeless body on the floor, and the cryptic phrase “It’s all for the lulz” painted all over the walls.

Ashley picks up a gun she finds at Zane’s place and rushes back to her house. She tells Proxy what happened to Zane and calls Binder for help. While waiting for Binder, Ashley points the gun at the door. As soon as she hears noise coming from outside, she immediately fires her gun, accidentally shooting Binder, who was just about to knock at her door. As if that weren't enough shock, Smiley suddenly comes out of nowhere and slashes Binder’s neck.

Ashley seeks refuge in her room, but her troubles only worsen when several Smileys suddenly pop out of thin air and start inching their way to her corner. Scared out of her wits, Ashley jumps out the window and falls to her death.

In the aftermath of the brutal killings, Ashley's devious friends are forced to "unmask" the mysterious killer's identity. It turns out that Smiley was nothing but a foolish prank concocted by Proxy and her friends to scare Ashley.

With Proxy and her scheming friends finally owning up to their misdeeds, a semblance of normalcy pervades the college coeds' online banter.

But for how long?

Just when they think it's safe to go back online, Zane engages Proxy in a video chat and—just for kicks—types "It's all for the lulz" three times.

Zane turns pale and trembles in fear as he sees the real Smiley pop up behind Proxy and slaughter her in typical macabre fashion.

WHO'S SCARED OF SMILEY? Smiley tries to cash in on the success of classic slasher and whodunit movies such as Halloween and Scream by infusing modern technological elements. Despite its potential to be one of the best slasher films of the year, it falls short of conviction and coherence.

For a slasher film, I find the “slashing” part a little lacking. Insignificant characters get killed, so who cares? Some parts of the film just drag on as the characters ponder serious logic stuff, which makes the film more complex than it’s supposed to be. Moreover, the story-telling gets really repetitive as the plot develops. Some scenes are unnecessary, for instance, when Ashley goes back and forth asking questions to her Logic professor and her psychiatrist about truth, evil, etc.

The movie uses way too many recycled scare tactics, such as the opening scene where a girl screams as she sees a mask of Smiley up close when she turns around. Such clichés may still offer some heart-pounding thrills to the uninitiated. But for a die-hard suspense-thriller fan, these cheap tactics induce smileys of a different kind, treading a fine line between campy horror and grotesque comedy.