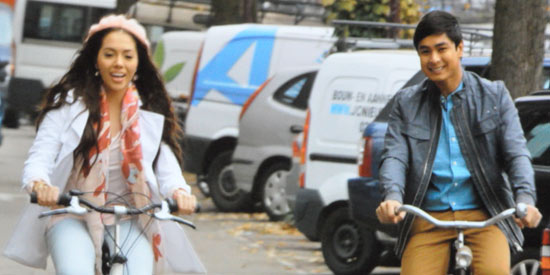 To the credit of both Coco Martin and Julia Montes, they were effectively able to remove traces of Daniel and Katerina in their performances for their first movie together titled A Moment in Time.

For almost 11 months, viewers have been used to seeing Coco and Julia bring life to star-crossed lovers in the ABS-CBN teleserye Walang Hanggan.

Under the direction of Manny Palo, Coco and Julia are able to offer moviegoers fresh portrayals as they bring life to their characters Patrick and Jillian.

As Patrick Javier—a passionate painter predisposed to creating dark and gloomy images on a canvass—Coco expertly portrays him as sporadically charming, deceptive, sweet and aggressive.

Julia Montes plays Jillian, an only child sheltered by her rich parents from the sordidness of reality. Julia plays the part with exquisitely combined innocence and maturity. She is perfect as a young woman coming-of-age to the truths and facts of life. Her vulnerability and strength shines through as she submits herself to the emotional machinations inflicted by Coco Martin’s character Patrick.

Her emotions are solid, intense and very affecting. Her acting chops slices away any doubts about her ability to portray young or adult characters. Talent-wise, she is clearly way ahead of her contemporaries.

Gabby Concepcion plays her father and protector of the family fortune. However, his role is given little room to develop so Gabby only comes off as an eager and jolly salesman.

In terms of plot, there are shades of scenes, characters and themes of recent Star Cinema movies rehashed in this movie.

The Patrick character, specifically his “in-your-face” persistence to woo Jillian, seems a milder form of John Lloyd Cruz’s character in The Mistress.

The public serenade performed by Patrick is reminiscent of what Mario Maurer did on Suddenly It’s Magic; the same way the beatbox performance of Julia Montes’ character Jillian is akin to what Erick Gonzales did in the same movie.

The birthday song performance arranged by Jillian to celebrate the surprise party of Patrick reminds one of the Toni Gonzaga-Vhong Navarro movie My Only U.

Patrick going to Amsterdam to desperately search for Jillian is evocative of Piolo Pascual looking for Iza Calzado in the movie Milan. Unlike Piolo’s character, however, Coco Martin’s Patrick behaves more like a stalker than a spurned lover.

In the scene where Patrick sees Jillian for the first time inside an LRT train, he doesn’t know her but he assumes that he does by calling out random names hoping one of it is hers. When he fails to catch her attention, he ups the ante by drawing her face on a wall. When that strategy fails, he chases her chauffeured car and hurls himself in front of it. Jillian labels him “weird,” but Coco’s character is essentially dysfunctional.

Thanks to Star Cinema’s slick storytelling; Coco Martin’s endearing magnetism and good acting skills; his dysfunction only comes off as cute, adorable and even forgivable.

Like a typical Star Cinema film, A Moment in Time makes use of contrived coincidences to propel the story forward--unfortunately decreasing the story’s believability.

Other than the Hallmark-card-like quotation spoken by Jillian’s fiancé (Joseph Marco) towards the end of the movie, A Moment in Time has nuggets of wisdom that audiences could learn from: