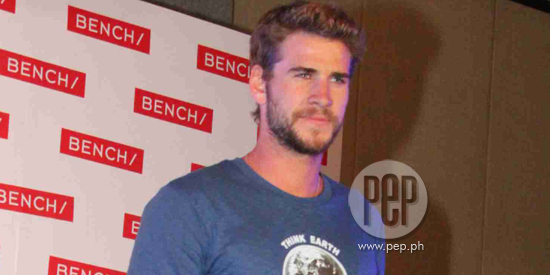 Liam Hemsworth took a break from filming Catching Fire— the sequel to the novel-based movie The Hunger Games—in order to meet his Pinoy fans.

The Hollywood actor was in the Philippines on March 15, courtesy of local fashion brand Bench, which organized a press conference at the Rigodon Ballroom of the Manila Peninsula Hotel in Makati.

Liam took time to answer several questions about his much-awaited movie, and his career as a budding action star.

CATCHING FIRE. Just like its prequel, the second movie of this franchise is going to be filled with highly emotional and action-packed scenes.

“The characters are developing more, and Francis Lawrence [director] has a whole new take on it, so it's gonna be really great.”

Fans of Liam’s character, Gale Hawthorne, are looking forward to this sequel as he gets to be more involved with the story— the love triangle between him, Katniss Everdeen ( played by Jennifer Lawrence), and Peeta Mellark (Josh Hutcherson); and the rebellion against the Capitol.

How is Liam preparing for these new challenges to his character?

"I try to keep as active as possible because in the movie, Gale is... his character is one who does a lot of hunting, and I also get whipped in this one.

"I actually spent a couple of days getting whipped, which was a pretty horrific situation,” he recounts about a scene wherein he gets punished for committing a “crime.”

JENNIFER LAWRENCE. Speaking of change, the Academy Awards, which were given out last February, shook the game a little bit for the stars of Catching Fire.

Liam's leading lady, Jennifer Lawrence, was this year’s Best Actress winner for her role as a widow-turned-nymphomaniac in the movie Silver Linings Playbook.

How does it feel now for Liam to be working opposite an award-winning leading lady?

"She's amazing!” Liam says, trying to imply that the actress remains humble as ever.

“She's one of the most energetic, fun-loving people I've ever met and, you know, working with her on set is just easy because she's so good."

ACTION STAR. Apart from the opportunity to work with an Oscar winner, Liam also gets to sharpen his skills as an action star in Catching Fire.

In 2012, Liam had a taste of what it is like to be an action hero when he worked on The Expendables 2.

Included in that movie’s cast were legends Sylvester Stalone, Jason Statham, Jet Li, Bruce Willis, Arnold Schwarzenegger, and Chuck Norris, who has spawned many Internet memes about his “invincibility.”

Liam talks about his experience working on this film and tells the most “kick-ass” scene he has ever done so far.

“I'd say working on The Expendables 2, working with that group of people... I mean, they are the biggest action stars ever.

“You know, I got kicked in the chest by Jean Claude Van Damme and it's an honor, I think.

“Stalone, Jason Statham, all those guys... I think it was pretty incredible to be working with them.”

With films like The Hunger Games series and The Expendables 2 under his belt, does Liam intend to build his career to become a bonafide Hollywood action star?

"You know, I look for scripts that I think are interesting and can hopefully surprise audiences wih something new to watch.

"And I also look for a director who is passionate about what they do, and also have a new creative look on film, and hopefully bring something new to the table, which we haven't seen before.

“So, those are the kinds of things I look for. I don't generally [look] into the genre.”

BEATING THOR. Meanwhile, the 23-year-old actor also got to show his silly side when he answered this hypothetical question about his career: “If you are given the chance to play a superhero in a movie, which superhero would it be?”

“Ah, that's a tough one!” he said, giving himself a few seconds to come up with an answer.

“I don't know... which one can beat up Thor? Probably that one,” he says finally, giving the audience a good laugh with his witty pun about his brother Chris Hemsworth’s character in the movie series The Avengers.

“[I’ll play] whoever wins over Thor,” he continued.

“I don't know if there is one, though. The Hulk comes pretty close.”

Program host Raymond Gutierrez interrupted him, saying that the Iron Man, played by actor Robert Downey Jr. in the movie, might be a good choice as well.

To that, Liam says, “That's right. Let me get back to you on that one.”