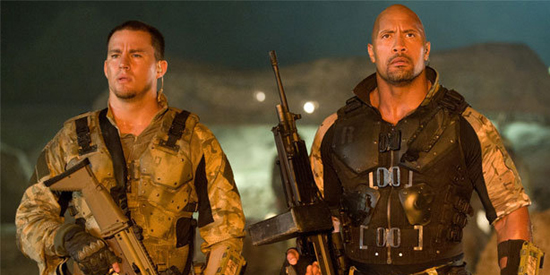 Channing Tatum (left) on his G.I. Joe co-star Dwayne Johnson (right): “Dwayne is an actual action figure. Every time I look at him on set I think ‘That’s The Rock!’ His arm is literally as big as my waist.” G.I. Joe: Retaliation will open in Philippine cinemas starting March 30, 2013.

This month, Solar will release its follow-up to the 2009 worldwide blockbuster G.I. Joe: The Rise of Cobra, which grossed over $300 million worldwide.


"In G.I. Joe: Retaliation, the team is not only fighting their mortal enemy COBRA, but they are forced to contend with threats from within the government that jeopardize their very existence. Converting the film into 3D takes the movie to a whole new level and brings the audience even closer to the non-stop action. G.I. Joe: Retaliation hits theaters in RealD 3D & Digital 3D.

"The G.I. Joe mythology runs deep and has a pantheon of characters to draw from, each with their own back-story, nuances and characteristics. When approaching the sequel, the filmmakers wanted to build on the best elements and storylines from the first film and carry those through to the second installment while simultaneously creating a new identity and feel. This offered the opportunity to introduce new characters from the mythology to the franchise.

"The addition of 3D to the film is going to bring the film into a whole different playing field.

"Returning from the first installment is Duke (Channing Tatum), the young all-American soldier who leads his team with confidence, precision and a great deal of pride. Duke, dedicated and loyal, will do anything to protect the soldiers under his care and strives to bring out the best in each one of them.

"Reprising the role is actor Channing Tatum, who brings ease to a character who appeals to a varied audience. “Channing is an everyman and we can relate to Duke much more because he is straight-up and has an amazing ability to feel familiar with the audience,” says director Chu.

“It’s been so fun to be back playing the biggest make-believe game of all time,” says Channing.

"With Duke as the head of the elite unit, the spine and backbone of the group is Roadblock, his second in command. Roadblock is a mountain of a man who helps lead the team with experience, honor and an unbreakable dedication to his unit and country. “He is one of the most loved characters in the G.I. Joe world and we knew we wanted Roadblock to be a part of the movie,” explained Chu.

"When casting a character known for his extreme physical dominance and legendary size, filmmakers were put to the task of finding an actor who could match the character’s physicality while embodying his internal strength and fortitude.

“There is only one person I can think of in the entire world who could ever embody this character and Dwayne Johnson was that guy,” says Chu. “Beyond the obvious fact of his physicality, Dwayne understands what it means to be a soldier and a leader. He brought an honor and grounded humanity to the role.”

"Chu continues, “Dwayne is essentially a G.I. Joe and that’s something you can’t act or script out. It’s just in his DNA. When you think of anyone who is almost a living action figure, Dwayne comes to mind.”

“Dwayne is an actual action figure,” says Tatum. “Every time I look at him on set I think ‘That’s The Rock!’ His arm is literally as big as my waist.”

"Like many, Dwayne Johnson had his own cherished memories of playing with G.I. Joe toys as a child. “As a kid, I loved playing with the G.I. Joe action figures. When I got involved with the project I began to understand the mythology and was impressed by how layered it is and how deep it goes,” says Johnson.

“Roadblock is considered the glue that holds the G.I. Joe team together and I really appreciated his reluctance to being in the front or in the limelight,” says Johnson. “He does it for the love of country and service and I find it very admirable when a man is in that space.”

"The relationship between Roadblock and Duke is that of a partnership steeped in mutual respect and experience. “Duke is the head of the G.I. Joe team and Roadblock is the spine and they work really well together,” explains Chu. “While Duke gives the commands and serves as the quarterback, he relies on Roadblock’s experience and strengths to back him up. Their relationship is very close.”