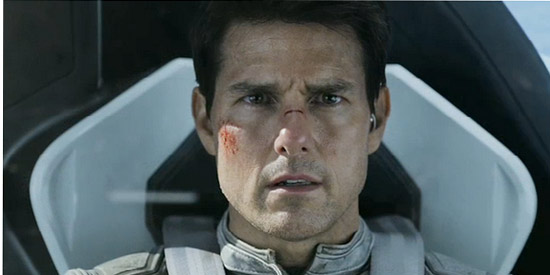 Minus the special effects, the fancy flying objects and the advanced technology it parades, the Tom Cruise starrer Oblivion is actually a love story: a fact declared by its co-writer and Tron: Legacy director Joseph Kosinski.

The movie is based on an unpublished would-be graphic novel of the same name that caught Cruise’s interest after he saw an unfinished art of it from the 2010 Comic Con.

Long before the script was written, Kosinski pitched the idea to Cruise for two hours. After the lengthy presentation, Cruise declared, “I want to do this.”

Fast forward to 2013, and Morgan Freeman, Andrea Riseborough and Olga Kurylenko star along with Cruise in this sci-fi movie.

Set in the year 2077, Oblivion revolves around a former Marine commander named Jack Harper (Tom Cruise) who is tasked to clean up residual enemy forces and extract remaining resources from the planet Earth. His partner in the assignment is Victoria, played by English woman Andrea Riseborough: the same actress who starred as Wallis Simpson in the Madonna-directed film W.E.

When Jack brings home a female survivor (played by Olga Kurylenko) from a crashed spaceship, he discovers a secret that would force him to shift his perspective as well as his personal and professional allegiance.

Oblivion seems to be a mash up of various sci-fi movies.

Some scenes might remind viewers of Stanley Kubrick’s 2001: A Space Odyssey, specifically the theme of man against the machine (or in Oblivion’s case, Jack against the gigantic floating mass that is the Titan) and Star Wars because ofthe battle scenes between the flying drones. There is also a slight resemblance betweenthe Morpheus character (played by Laurence Fishburne) in The Matrix and that of Morgan Freeman’s character in Oblivion.

The mandatory memory wipes present in the film is reminiscent of another Tom Cruise movie that dealt with memory loss: Vanilla Sky (2001), which was shown in the same year Cruise was divorced from Nicole Kidman.

Though the first part of Oblivion was explained literally by a voice over from Jack as he introduced the story’s set-up, it did little to make the film engaging.

The film starts with slow pacing because Oblivion gave too many details that bogged down one’s attention. It’s hard enough to memorize all that information in order for viewers to appreciate the payoff that would come in during the second and third acts of the film.

Oblivion seems intent to wow moviegoers or make them gape in awe at the intricate details of the tale it’s telling--conveniently forgetting that it had to capture our hearts, not just our minds.

There is little emotional nuance in the film or in Tom Cruise’s performance. Unlike his past characters that have a healthy sense of humor, Cruise’s Jack Harper seems just as mechanical as the drones on post-apocalyptic Earth.

There is heavy emphasis on Cruise being an action star as he is seen riding a motorcycle, his character falls from a hole in the ceiling, and he is gunned down mercilessly by enemy drones.

In contrast, the women in the film simply became passive witnesses to Cruise’s action-star glory.

When you watch this sci-fi film, be prepared to debate with your companions since the film triggers a lot of questions.

Oblivion is like a puzzle wrapped in a conundrum swathed in Tom Cruise.

Though Oblivion ticked off all the boxes on how an engaging movie should be: stellar cast, gorgeous heroines, thriller, suspense, action and mystery, it all seems cerebral and too emotionally cold.