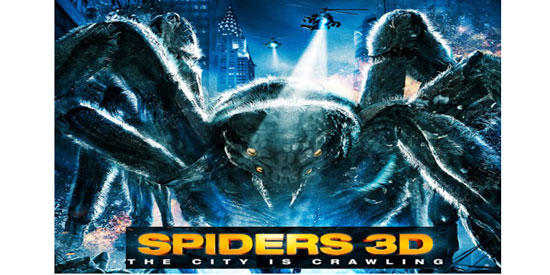 Spiders 3D is a low-budget sci-fi/horror movie, which can be described as campy, reminiscent of old monster movies, especially in the 1950s (Think of Godzilla, King of the Monsters, Them!, Tarantula, 20 Million Miles to Earth, and The Giant Gila Monster, among others).

The movie is unconvincing because of its thin plot and the stars’ poor acting.

Unlike former monster movies, Spiders 3D's strength mainly lies on its improved and modern special effects that give a more realistic appeal, but it cannot be called seamless.

The film has a couple of surprise elements, thanks to its musical scoring, but this too is not without fault.

The movie is topbilled by Patrick Muldoon, who portrayed Richard Hart in the TV series Melrose Place (1995-1996) and was part of the sci-fi movie Starship Troopers (1997).

In Spiders 3D, Patrick portrays transit supervisor Jason Cole, who is having domestic problems with his estranged wife, Rachel (Christa Campbell who appeared in the 2006 film Lonely Hearts and The Wicker Man in 2007 with Nicolas Cage).

The film begins when a disabled Soviet space station falls to earth. It happened to be carrying an alien species of spiders that turn gigantic overnight.

In the turn of events, Jason's and Rachel's love for each other resurfaces when they work together to save their daughter, whose life gets imperiled by the deadly giant spiders.

The actors’ acting was lacklustre, and they seemed to lack the inspiration to perform their parts well in the movie, and in effect, fail to conjure up the intended reactions from the audience in a number of supposedly intense moments.

One good thing that comes out of the movie is the message that sometimes, the worst situations bring out the best in people and could probably lead to good results.

All in all, the movie does not offer much but it is a good option for those who want to feel nostalgic as they watch sci-fi/horror monster movies offering better special effects.

If you want to enjoy a campy monster movie that you used to enjoy as a kid, then Spiders 3D is for you.