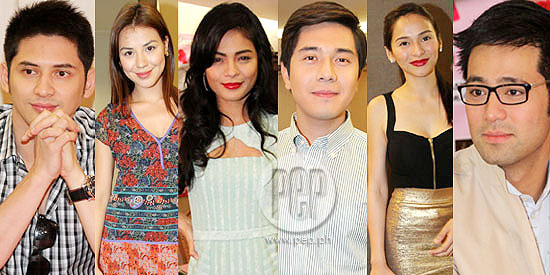 Despite the strong conservative stand on pre-marital sex in the country, the cast members of The Bride and The Lover adhere to a more modern, pro-choice stance. DJ and actress Carla Dunareanu’s answer says it for the group: “I think everyone’s different, I think everyone’s got their own stand on it. However comfortable you are with the person you are with, I don’t think anyone has the right to judge that.”

Marriage before sex or sex before marriage?

Lovi Poe’s character, Vivien Paredes, in The Bride and the Lover, delivers a striking line in the trailer: “I can’t believe I was stupid enough to actually believe in that ‘No sex before marriage’ thing!”

In the story, Vivien, the prim and proper kind of lady, is cheated on by her groom (Paulo Avelino) with her best friend (Jennylyn Mercado). While The Bride and The Lover has yet to premiere in cinemas on May 1, the movie trailer gives away a portion of the plot where Vivien undergoes a radical change of character after the incident. She transforms into a liberated woman who engages in casual sex.

At the press conference held last Wednesday, April 24, at the Imperial Suites in Quezon City, several intriguing questions was asked for all cast members:

Do they believe in engaging in pre-marital sex, an act that the teachings of the Catholic faith deems immoral? Or do they take the pro-choice stance which leaves the judgment to an individual?

Ahron Villaflor was the first star to answer the question. His character is the guy whom Vivien meets at a bar and whom she eventually engages casual sex with.

While he initially stated his ambivalence, the 25-year-old character actor said that sometimes two people in a relationship cannot help but give in to each other.

“Kumbaga, 2013 na tayo and talagang minsan hindi natin maiiwasan na, alam mo yun, nakakapag-sex kayo and then magkaka-baby and then [you get] married.”

In conclusion, the actor said that virginity is not an issue for him. He would rather end up with the woman he truly loves and loves him back.

Magic 89.9 DJ Carla Dunareanu, who is cast as the best friend of Lovi’s and Jennylyn’s characters, stated her pro-choice stand.

“However comfortable you are with the person you are with, I don’t think anyone has the right to judge that.”

Carla, also the girlfriend of crooner Christian Bautista, debuts in her first big screen project in the Philippines in the said Regal Films production.

“We live in this generation already,” said the daughter of the late King of Philippine Action movies, Fernando Po Jr.

“So, I don’t think anyone has the right to judge anyone.”

Gawad Urian-winning actor Paulo Avelino said that while he respects the conservative stand of most Catholics, living life to the fullest also matters.

The beautiful Jennylyn Mercado, a single mother to 4-year-old Alex Jazz, laughed off the inquiry at first.

The GMA-7 actress reasoned that the kids of today’s generation are privileged with an early education regarding sex.

“Sa school pinag-aaralan na yan as early as Grade 5 or 6.

Controversial personality Hayden Kho Jr. also debuts on the silver screen. In The Bride and The Lover, the on-and-off boyfriend of celebrity beauty surgeon Vicki Belo plays the character of Vivien’s loyal head of bodyguards.

Hayden, whose reputation in the industry was marred by his sex videos that went viral on the Net in 2009, made a disclaimer that he is not one to talk regarding the issue.

He, however, attempted to answer in all modesty: “Kung makakabalik ako sa panahon, siguro… I’d go for marriage before sex.

“Of course, coming from me, parang ‘Wow! Hayden? Marriage before sex?’

“I would stand for that before but nagkamali ako at natutunan ko yun,” explained Hayden, who is also the operations manager of ZO Skin Health and Medical System.

He ended the forum: “So, kung ako tatanungin mo, right now, ang sagot ko, marriage before sex. And that’s I would teach kids, the next generation, teach my kids, especially kung babae.”

Directed by Joel Lamangan, The Bride and The Lover will premiere in cinemas nationwide beginning May 1, 2013.