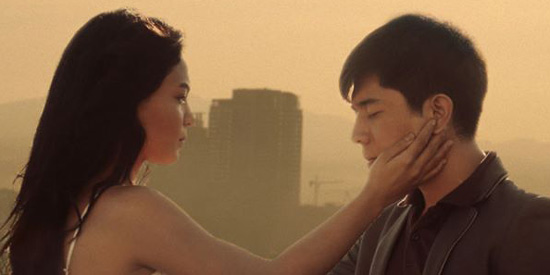 Jerrold Tarog is back to directing an indie feature titled Sana Dati. This film is one of the entries competing in the 9th Cinemalaya Philippine Independent Film Festival that will take place in July 2013.

Here's the synopsis of Sana Dati:

Sana Dati by Jerrold Tarog is a story about Andrea Gonzaga (Lovi Poe) who has accepted her fate by agreeing to marry a man she does not love. This would be rich businessman and former politician Robert Naval (TJ Trinidad). But a few hours before Andrea's wedding, a videographer named Dennis (Paulo Avelino) arrives and strangely reminds Andrea of the one person she truly loved but nobody in her family knows about—a man named Andrew Cesario (Benjamin Alves).

Sana Dati is the third part of Jerrold Tarog's "Camera Trilogy" after Cinema One Originals’ Confessional (2007) and Cinemalaya’s Mangatyanan (2009).

The last time Jerrold Tarog joined Cinemalaya was in 2009, with Mangatyanan, his second film (after debuting as filmmaker in a Cinema One Originals Filmfest 2007 big winner, Confessional).


PEP : Sana Dati is a romance-drama. You said it's the last of the "camera trilogy," after Confessional and Mangatyanan ( The Blood Trail ).

JERROLD : I'd like to leave it to the audience to come up with their own interpretation.

But, of course, the film is consistent with the earlier two films in the sense that they're variations on the interplay of lies and truths, as revealed or hidden by the lead character's camera, whether it's personal (Sana Dati), cultural (Mangatyanan), or socio-political (Confessional).

PEP : Based on the synopsis, which tells the story of a young woman on her wedding day, there seems to be a "mystery" as it also narrates how the woman's encounter with a young man, who plays the videographer, would relive past memories of a past love. Parang "time travel" ba ang idea, na may reincarnation or something?

JERROLD : The story happens in a span of a few hours, during the female lead's wedding. May mga flashback lang naka-intercut sa wedding.

(Note: in the film's blurb, Sana Dati is about "A Lifetime of choices in a Single Day".)

PEP : Will the conflicts affecting major relationships in the story be so intense, pero later, "magpapakilig" din, sort of?

PEP: Was it a deliberate choice on your part to cast Paulo Avelino and Lovi Poe as leads, after they did "aswang" roles in one of your previous films? How was it working with them?

JERROLD : The script (of Sana Dati) has been around since 2007 so, naturally, madami nang pinagdaanang casting choices yan. But I'm happy and thrilled that I ultimately ended up with Lovi and Paulo.

These are two very talented actors. It's exciting to watch them perform. And with TJ Trinidad and Benjamin Alves, plus the rest of the supporting cast, ang gagaling nilang lahat. I'm proud of my cast.


Co-produced by Metric Films, Inc., Sana Dati is a Directors' Showcase entry for the 9th Cinemalaya Philippine Independent Film Festival, to be held from July 26 to August 4, 2013 at the Cultural Center of the Philippines (CCP) and other theater venues, such as the Greenbelt 3 (Makati City) and Trinoma Mall Cinemas (Quezon City).