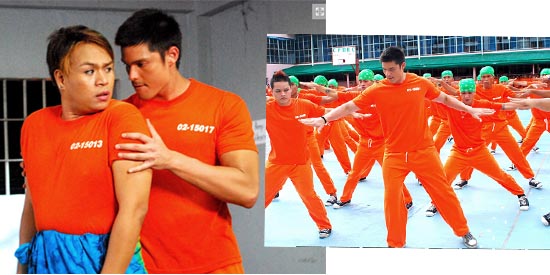 I expected a gloomy film, but what I saw was the reality hitting me hard in the face.

While watching the very unfortunate plight of Frank Parish (Patrick Bergin), who got wrongly accused of murder— I wanted to scream, "Our justice system sucks!"

While witnessing the ruse of deputy warden Diaz (Gabe Mercado) and Dong Mata (Thou Reyes) to create trouble inside the prison, I had to tell myself, "Hope such wickedness does not really exist in prisons."

Dance of the Steel Bars did not amaze me in a way an animation and effects-laden movie would, but it moved me.

The story encapsulated the good and bad, the positive and negative, the upright and wicked.

Do not expect heavy drama or the exaggerated depictions in teleseryes. Do not expect an overdose of Joey Paras' comic antics.

Briefly, it showed the loose justice system— yes, you can get jailed for doing nothing and your case may be eventually dismissed but you'll be the last person to know.

It showed the harshness of life inside prison... and, at times, the bartolina.

It showed the rotten condition of Pinoy inmates, which is sometimes condoned by the warden or whoever is in power.

It showed how the Filipinos find happiness even if they're in dire circumstances.

Screenwriters Cris Lim and Michael Villar did a good job of putting everything together, even if there were so many intricate sub-plots and issues.

The transitions from morbid to affirmative were gradual, doing its best to stick to the film's tone all throughout. I initially feared that one of the nice characters might die, but that would be too crass. Instead, deputy warden Diaz's sudden change of plans became one of the crucial twists.

Along the way, there were a few signs of faltering, and minor issues on the continuity, but the script was almost faultless. It gave each character the moment they deserved.

Speaking of characters, good job to all!

Patrick Bergin displayed depth (I just loved his song number and harmonica); Gabe and Thou were both impressive; Joey, was— as expected— remarkable; and Dingdong Dantes was very intense (I loved the way he fused emotions into his dance).

The best part was the ending, which showed a multitude of the prisoners dancing to the steps of renowned choreographer Cindera Che (she was, by the way, the muse in Michael Jackson's Smooth Criminal video).

I had goosebumps... it was so wonderfully done! I wished though it was longer, and hoped there were more top shots.

Before the screening, I asked direk Cesar his motivation for doing the film.

After the screening, I just had one comment for him and co-director Marnie Manicad: Guys, you nailed it!