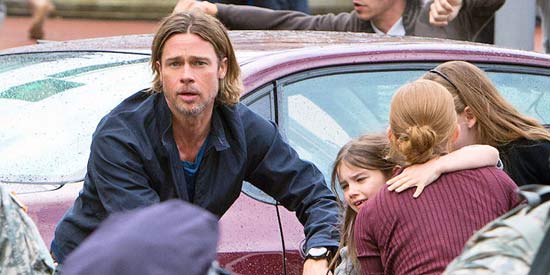 World War Z is a nightmare.

It depicts a world invaded by the undead—not the typical sluggish, run-of-the-mill zombie, mind you, but fast-moving and savage creatures rampaging across the globe in hordes.

Ideally, they go into uncontrollable (and eerily annoying) tics and stare off into space, livid. But once they’re motivated by sight or sound, they run, they jump, they gnaw, they chomp, and they ravage any living thing that comes their way. They veer away from the common perception of how zombies should be like, and that’s just scary.

This is the world where ex-United Nations employee Gerry Lane (Brad Pitt) and his family lives in. They live in a nightmare, where crazed zombies suddenly pop out of nowhere, ransack their entire city, and much to their dismay, nearly overrun the entire planet. Together with his wife and two daughters, Gerry runs in a race against time to fight off the undead, and hopefully save the entire human race. Gerry is a family man through and through, and as the movie revolves around his character, the audience comes realize that they’re ultimately watching a family story.

Yes, it is an apocalyptic movie. Yes, it’s a thriller. It’s bleak and terrifying, but it also deals with themes such as love, sacrifice, trust, the unyielding persistence of human will, and the importance of being able to save one’s skin when push comes to shove. It’s chock-full of horrors, but the movie also attempts to shed light on values that makes the human race worth saving. Having that said, if you want to teach your six-year-old child about the said themes, this movie might not be a good place to start.

World War Z has a lot of scares up its sleeve. It has all the elements of horror: dimly lit halls, gnashing in the dark, abandoned buildings, and lots of terrifying monsters. And while several horror films tread into a more “experimental” territory, this one delivers intense nail-biting scenes. It doesn’t feature flashy editing, jazzy lights, creative angles, sweeping landscape cinematography, and the like. It tells the story as it is should a zombie apocalypse happen.

Brad Pitt convincingly plays the lead role. He is first portrayed as a loving father, but he also looks someone who is capable enough to handle emergency situations. But while he looks like someone who can survive in the worst circumstances, he also shows fear and weakness, a character who is unafraid to reveal his humanity.

While it has a lot of merits, the movie isn’t completely without fault. In fact, one major drawback would be the movie’s conscious attempt to seemingly “out-scare” itself. The lead character is pitted into series after series of unfortunate events, ranging from the realistic to the bizarre. At one point, the audience couldn’t help but just wish for the poor guy to finally get a break. For roughly two hours, Gerry is seen globe-trotting from Korea to Israel, fighting for dear life, always with a legion of zombies behind him. Indeed, it’s a nightmare—terrifying scenes unfold into darker and scarier sequences, the odds usually against the protagonist’s favor.


Loyalists of the novel may also not be too keen on the fact that the film departs largely from Max Brooks’ book.


Indeed, World War Z is a nightmare—and it may work both ways. If you’re expecting horror, adrenaline rush, and pretty much a “surprise” that will have you screaming (or gasping) for dear life every now and then, this may be your cup of tea. But for those who are planning to relax and to relax after a long day’s work, you might want to save this movie for later.


Nightmares are definitely not for the faint-hearted, after all.


World War Z, rated PG-13 by the Movie and Television Review and Classification Board, is currently being screened in Philippine cinemas.


Ed's Note: The "PEP Review" section carries the views of individual reviewers, and does not necessarily reflect the views of the PEP editorial