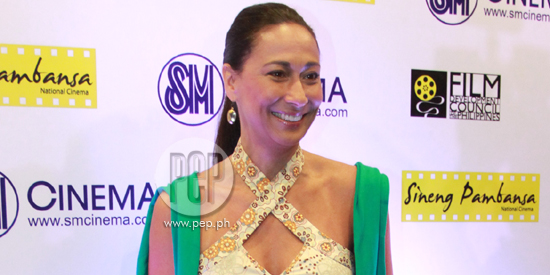 When asked to describe her character in Sonata, Cherie Gil said, "I play an opera singer who loses her voice. My character rediscovers life all over again through the eyes of a little boy." Her co-actor Chino Jalandoni is the 10-year-old grand nephew of Joel Torre. The star and co-producer of Sonata says about her indie film: “I am convinced to support this film, even if I have to ‘prostitute&

Veteran actress Cherie Gil is never the type to beat around the bush. She is open, very much candid, and often speaks her mind.


So when she described her performance in the indie film, Sonata, as her most genuine thus far, one finds it almost easy to believe that it might indeed be her best performance to date.


“I think this is the truest performance I have ever given in my entire career. I feel very emotional,” she says about portraying an opera singer in Sonata.


Cherie was one of the stars who attended the August 29 press conference of Sineng Pambansa National Film Festival All Masters Edition held at the IMAX Lobby of SM North Edsa.


Directed by Peque Gallaga and Lore Reyes, Sonata tells the touching journey of a well-traveled opera singer, Regina Cadena (played by Cherie Gil), who fell into depression after losing her voice. When she came back to her hometown in Negros Occidental, she rediscovered life and art through the eyes of a little boy named Jonjon, played by 10-year-old actor Chino Jalandoni, the grand nephew of Joel Torre.


“I am convinced to support this film, even if I have to ‘prostitute’ myself to get more money,” Cherie quipped.


“That is why I do teleseryes everyday until the mornings, in the wee hours, so I can put more money into other projects.”


Other than playing the lead role, Cherie also serves as a co-producer of Sonata, which is one of the entries to the Film Development Council of the Philippines’ (FDCP) Sineng Pambansa National Film Festival All Masters Edition, which will run from September 11-17, 2013.


As an entry to the first-ever All Masters Film Fest, Sonata was granted earlier this year, along with other entries, a Php 1.5 million seed capital under the Film Investment Program of FDCP. The directors were also permitted to source capital from partners or co-producers.


With this, Cherie hopes that it would be the beginning of better things to come for the industry. “And I hope we can prolong it [festival duration] to two more weeks if we can. That way, we can gain more revenue so that we grow more funds for next year’s projects. At sana ’di na tayo mahirapan gumawa ng pelikula kasi marami naman pala pwedeng pagkuhanan pa [funds].”

REUNION PROJECT. Sonata is also Cherie’s reunion film with Direk Peque, who was her director in the 1982 classic film Oro, Plata, Mata.


Of this, Cherie said, “Full circle para sa akin ito. Dahil unang-una sa lahat, kilala ko na si Direk Peque, he has worked with me, trusted me, and he mentored me through my life as an actor... And Peque and I, he has seen me grow, be it on screen or off screen. And he is better than anyone I have worked with in the business all over the years… We already found that language of understanding,”

“And the collaboration between Peque and Lore essentially blossomed among us three. And Sonata to me is a symbol of that journey. If you look into the dictionary about its meaning...Music is a composition of two instruments coming together, creating beauty and harmony. And here, we have Lore and Peque creating beautiful stories together.”

For his part, Direk Peque also had nice things to say about the seasoned actress. In essence, he captured the kind of actor Cherie was. “I want to give you a little example of anong klaseng artista si Cherie, what kind of person you are working with.

“In connection with the other question as to the challenges that we encountered, we only have money for eight days, so dapat eight days ang shooting days, so dapat walang break. And many times, Lore was out with the kids shooting in the hacienda part, and I was in the bedroom with Cherie, shooting her breakdown.”

He continued, “May mga eight or nine sequences na Cherie was going crazy and having a mental breakdown. So we decided logistically that we were going to shoot that day. So emote ng emote siya. Pumapasok sa sarili niya. She would go in, deep. And after awhile naka-head phones na siya, listening to music. She was really going into her personal pains. She would go ‘Uh! Uh!’ [a sound similar to a person being exorcised] and that preparation pa lang, ang pangit!” he said in jest.

LOSING HER VOICE ON AND OFF CAM. The film Sonata is about an opera singer who becomes depressed after damaging her voice. The worn-out artist recovers her spirit as she explores her hometown in Negros Occidental through the help of Jonjon (played by first-time actor Chino Jalandoni).


In an interview with PEP.ph (Philippine Entertainment Portal), Cherie admits that this character is somewhat based on her experience. "This character is more of related to me since I lost my voice many years ago and I had to undergo surgery. If you ask Peque why he did this story, it is based on that moment of my life."


Cherie also reveals that as a co-producer of Sonata, she was able to contribute to the creative aspects of the movie. "Peque and I always have had that collaboration whether or not I'm co-producing or not.


The veteran actress also admitted that she has been jealous of her family members who are always tapped to star in indie films. "I was always jealous of my brother and my nephew since they are always in demand for indie films. They make really interesting stories and sabi ko, sasabak rin ako diyan. Nagkataon lang na this year was a golden year for me. I turned fifty and things have just happened...I did Ekstra and Sonata."


She also points out the difficulty of getting good roles that are suited to her age. "Women of my age hirap nang kumuha ng magandang papel. I think it's a universal problem even in Hollywood. There are few interesting roles played by women my age. I'd like to create stories that will bring about more definite empowerment for women my age."


Was it difficult shooting intimate moments with Richard Gomez?

"No, we've known each other for so long and we've worked with each other so many times at kumportable kami sa isa't isa. Para ko na lang yan kapatid. All I told him was, 'I Dawn Zulueta mo ako!

"I am very grateful for what Richard did for this film. He went all the way from Ormoc during the campaign period to shoot one day for his two scenes."

It is one of the full-length films that will screen exclusively at SM Cinemas in over 45 SM branches nationwide from September 11 to 17.