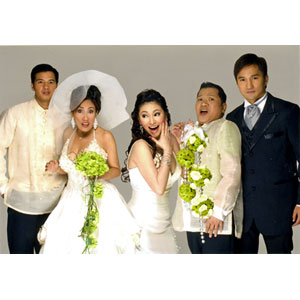 Contrary to the popular notion that Pasukob is merely a comic rip-off of Kris Aquino and Claudine Barretto's 2006 horror-suspense movie Sukob, Direk Wenn explained that the film is actually made up of different scenes culled from other contemporary Pinoy horror films.

"Aside from Sukob we also incorporated some [scenes] from Feng Shui and Huwag Kang Lilingon, among others," said Direk Wenn.

In the movie, Ai-Ai portrays the luck-deprived character of Julia Rose. Owing to the deaths of her previous three husbands the moment she gave birth, Julia had long given up the idea of tying the knot. That is, until she meets Arthur (Antonio Aquitania). Convinced of Arthur's unparalleled devotion, Julia decides to give love another chance.

Lucky Jenny Rose (Rufa Mae), on the other hand, is busy with her upcoming wedding to boyfriend Dino (DJ Durano). Compared to Julia, Jenny's wedding is considered as the icing on the cake, meaning her life sweetly spiced with good luck. It is under these circumstances that Jenny and Julia's path would cross. Both soon find out that they share a common past, which is vital for them to break a horrifying future.

Given their status as showbiz's top comediennes, both Ai-Ai and Rufa Mae say that there's no professional jealousy between them.

"Tawa nga lang kami nang tawa," said Rufa Mae while having a cup of coffee last October 24 at Guilly's restaurant where the film's presscon was held.

For Ai-Ai, she said that Rufa Mae is a good friend with whom she enjoys working as it doubles the fun.

Pasukob will be shown starting November 28 in theaters nationwide.