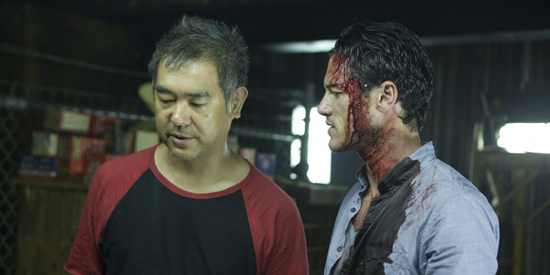 Director Ryuhei Kitamura (left) with Luke Evans (right), the lead star of No One Lives.


Ryuhei Kitamura’s unique visual style has propelled him to international acclaim as one of the entertainment industry’s top filmmakers.

In 2008, Kitamura directed his first Hollywood movie, The Midnight Meat Train, based on a novel by legendary Clive Barker for Lakeshore Entertainment and Lionsgate starring Bradley Cooper, Leslie Bibb and Vinnie Jones, which won both the Audience award and the Sci Fi Jury Award at the Gerardmer Film Festival.

In 2009, he directed his first animated film, Baton, which was written and produced by the internationally acclaimed writer/director Shunji Iwai. The film was made for the EXPO of the 150th anniversary celebration of the city of Yokohama in Japan.

In his upcoming film No One Lives director Ryuhei Kitamura took part in our latest Q&A session, telling us about his love for the lead character Driver, working with Luke Evans and Robert Hall, and what’s next:

Thank you very much for taking the time to talk with Daily Dead. What was it about the script for No One Lives that made you want to take on this project?

"I loved the script because it was not just about blood and guts. I was fascinated by the character of Driver; a non-stop killing machine doing it all for love. To me this is a twisted love story."

When looking for your lead actor, was Luke Evans your first pick? What made him stand out from the pack and why was he perfect for this role?

"Luke was the first and only candidate. I needed someone who was not only good looking and sexy but also has intelligence, madness, and a sense of humor. Luke gave life to the Driver character. He is an amazing actor.

When it came to the script, did you work with David Cohen to make any modifications? What are some of the changes that were put in when you boarded the project?

"The script was very good already so there weren’t many big changes but yes I worked with David closely and added some ideas and developed characters and relationships. Most of the fun bloody killings and funny lines were already there."

Horror fans are really turned off by CGI effects and I was happy to see No One Lives use plenty of practical effects. Was that something you insisted on? What was your experience like working with Robert Hall?

"I’m not a big fan of CGI blood so I was determined to go more analogue, in an ‘80s way and I’m glad that Robert Hall was able to help make it possible. Robert is not only the special effects artist but also a director himself and cares about the movie overall and not just the effects. It was pleasure working with him."

Were you happy with how the final movie turned out? Was there anything major from the movie that was changed or was cut out?

"Here are too many people involved in making movies and it’s very hard to fight through to protect my vision 100%. I did my best and I am proud of the movie."

Would you have any interest in working on a sequel to No One Lives? Is that something that has been actively discussed?

"No. I did everything I can on No One Lives and there’s not much left I can do. I’m not that interested in creating a sequel to it… though I am working right now on the sequel to VERSUS2."

Can you tell us about the projects you have coming up next?

"Can’t say much but I’m in pre-production on my new action movie which will be shot in Asia. I have projects on the docket but it’s movie business so you never what you will be doing next. Whatever it is that I do next, I’ll do my best to make it a fun movie with my style."