Adelaide Clemens on working with Luke Evans: "It was like a chess game every time we were working together." 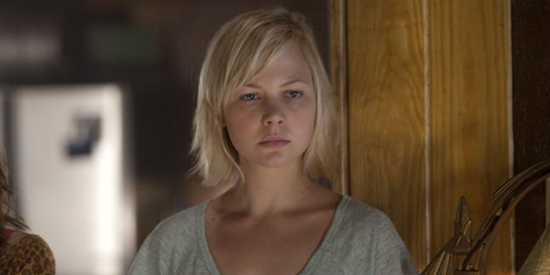 Australian actress Adelaide Clemens researched about Stockholm Syndrome for her character in No One Lives. Adelaide previously starred in Generation Um... and The Great Gatsby.

Adelaide Clemens has been gaining a fair amount of attention this year, first for her role in Generation Um… and now with the new horror/thriller No One Lives.

The Australian actress has been steadily on the rise in the past couple of years, popping up in pictures like Silent Hill: Revelation. The actress recently has been bobbing and forth between independent and mainstream movies.

In No One Lives, she plays one of the killer’s victims who is desperately trying to run away from the man who has kept her in hiding for the past year. Now she’s found herself trapped in a house with a group of strangers, warning them to run and hide from the psychopath. When they refuse to listen to her, they all become trapped in the sinister world of the psychotic killer.

You’re one rather busy young lady this year. You just appeared in Generation Um… and not only are you appearing in No One Lives but The Great Gatsby as well.

"It’s a bit tragic isn’t it? Yeah, it’s a good time. What’s funny is that the productions, I shot Generation Um… almost two and a half years ago. Gatsby feels like forever ago, over a year and a half. I’ve been working but nothing’s come out until now! It’s really nice."

The dynamic between your character and Luke Evan’s unnamed character is an interesting one. There’s a lot that’s happened between the two of them clearly within the span of time that he’s kept her. Do you believe that Emma in some ways developed a form of Stockholm Syndrome?

"I definitely think that was the case. I did a lot of research into Stockholm Syndrome because basically she’s been in solitary confinement for two years, and it’s a natural human response to have a quest for love or connection no matter what the circumstances are. So it’s kind of a frightening thing, but this sort of thing happens, but I have had to—I’ve tried to create my own depiction of Stockholm Syndrome not based on anyone, any specific kind of case, but I think it is like living in an environment with someone and creating a relationship where it’s intriguing because he’s the only way that she will cover her basic needs, and people will do anything for that, but it’s a whole kind of psychological discussion."

Now considering the whole dynamic between your characters, did you purposefully not have as much rehearsal time with Luke Evans? How was that general work relationship like with him?

"It was fantastic. I mean we both had dinner and worked independently and I think the dynamic that that created was really interesting because it was so unpredictable. He was so unpredictable to me and the moves he was going to make physically, emotionally. I really was kind of standing and waiting. It was great and he didn’t really know what I was going to do. So yeah, it created a very kind of visceral—it was like a chess game every time we were working together."

"It was great. I think the physicality of each character was the most fascinating thing. So that I really remembered just being really intrigued by that and loving the process. Derek [Magyar] was fantastic and I was really impressed by him. It was fun."

Now what is your general approach when it comes to taking on roles like this? What’s nice is seeing you continually broaden your acting scope with a variety of different characters, like who you played in Generation Um… compared to who you were in Silent Hill: Revelation.

"I wasn’t formally trained and so my process has been very different for every project. It usually starts with some form of research and as much as I can really get my hands on really. I don’t really like talking about it too much because it probably doesn’t make that much sense but sometimes I read poetry, sometimes I read music. The director for me is always involved and often just trying to get my head psychologically around the character."

Has acting always been one of those things that you’ve been wanting to do ever since you were a kid?

"None of my family, my friends or anybody else around was involved with the film industry. The notion of being an actor was so far fetched. So I never really contemplated being it, but I look back and I obviously gravitated towards it. I was always spending my extracurricular activities dealing with drama or Shakespeare, dance, music, being involved with the choir, things like that. So I definitely loved performing and it was just the kind of strange kind of journey towards it, and here I am!"