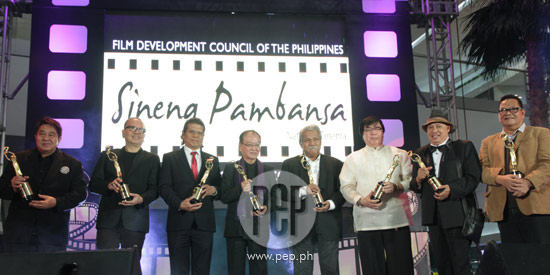 Veteran Filipino directors were honored and given trophies during the recognition ceremony held at the Mall of Asia Atrium last September 7.

The Film Development Council of the Philippines, in partnership with SM Cinema, hosted this grand reception event for the filmmakers and the stars who took part in the 2013 Sineng Pambansa National Film Festival All Masters Edition.

Chito Roño (Badil) as well as Peque Gallaga and Lore Reyes (who both worked on Sonata) were unable to attend the event.

In this year's edition, moviegoers will also have the chance to watch the final obra of master filmmaker Celso Ad. Castillo titled Bahay ng Lagim, which stars Karel Marquez, Jaclyn Jose, Bing Loyzaga, and Ronnie Lazaro, among others.

The September 7 event was hosted by Gelli de Belen and Janice de Belen and featured performances by Dulce and Rochelle Pangilinan.

During the program, a teaser of each movie was shown to the public and participating filmmakers and cast members were given time to talk about their respective projects.

The celebrities who starred in this year's entries also took the time to attend the event that lasted from 5 pm to 8 pm.

Tikoy Aguiluz graced the event with the family members of the slain activist poet Emmanuel "Eman" Lacaba. Direk Tikoy explained that the stars of his film were unable to attend because they were still in Davao and Cotabato.

It was previously reported by another media outfit that Derek Ramsay was supposed to play the role of Emmanuel "Eman" Lacaba. However, in a separate interview with FDCP, it was revealed that Derek was unable to shoot scenes for the biopic Eman.

In that same exclusive interview with PEP.ph (Philippine Entertainment Portal), FDCP Executive Director Teddy Granados also revealed that the proceeds of the Sineng Pambansa National Film Festival All Masters Edition will go to the building of the first National Film Archives.

(Read FDCP's explanation here: What are the plans of FDCP for the 2014 Sineng Pambansa?)

Romy Suzara, who helmed Tinik, also disclosed that they just finished shooting principal photography earlier that morning, September 7, and they only had three hours of sleep before attending the recognition ceremony at the Mall of Asia Atrium. He also revealed that the lead stars of his film fell sick on that day as well.

Even though Direk Chito was unable to attend that day, a teaser of Badil was played and it was shown that Jhong hilario plays a key role in this film, which is described by FDCP as a "window into how flawed our basic political right has become."


Aside from these works created by these veteran directors, the restored versions of Filipino classics Maynila sa mga Kuko ng Liwanag by Lino Brocka and Manuel Conde's Genghis Khan are also given screening schedules from September 11-17.


UPDATE: As of September 12, the FDCP announced that "after unforeseen technical difficulties, Chito Roño’s Badil will finally join the roster of films included in this year’s Sineng Pambansa National Film Festival All-Masters edition. The film will begin screening at all SM Cinemas on Friday, the 13th of September."

In a previous announcement, the FDCP revealed that there were "certain delays" in the screening of Eman (directed by Tikoy Aguiluz), Tinik (directed by Romy Suzara), and Bahay ng Lagim (by the late Celso Ad. Castillo).

The annoucement made on September 11 indicated that "these films are in various stages of post production but will be made available in selected SM Cinemas by no later than this Friday.

"Thank you for your understanding and we appreciate your continued support."


JUNE 12 AS TARGET FOR 2014. During the August 29 press conference organized by the FDCP and SM Cinema, it was revealed that for next year's edition, they are planning to kick off the Sineng Pambansa on Independence Day.

"Next year, it will be on June 12 so it will truly be a National Film Festival. Kalayaan ng Pelikulang Pilipino," declared FDCP executive director Teddy Granados. "It will be every year, every June 12 from next year onwards."

What would prompt the FDCP to sponsor another All Masters Edition?

"Next year's approach is a little different because we started a scriptwriting competition now. Once the winning scripts are selected ito ang gagawing pelikula.

"What we will do is put up a fund for each film, say P2 million then ask [local] and foreign producers to co-produce these films and once the production team is completed, we will tell them, we have a list of directors here. The executive producers will then determine which director will interpret the film.

Mr. Granados also mentioned that 12 scripts will be selected for next year's edition.

PEP.ph (Philippine Entertainment Portal) asked the organizers why there will be no awarding ceremony for the All Masters Edition.

Mr. Granados simply answered, "This is a Masters Edition so wala nang competition. Wala nang awards. This is an exhibition of all the films.

"We discussed that previously and it turns out, hindi viable yun."

Direk Maryo J. delos Reyes later added: "Yung napagkasunduan namin, walang awards na ibibigay. It will be an exhibition of films by master directors kasi we feel this is our chance to be together in an event na hindi kailangan mag-compete.

Direk Maryo's comment drew applause from the group of reporters gathered that day.

"Let the other award-giving bodies later on perhaps give the awards that the films deserve and the artists that took part in this."


By 2014, films by Mike de Leon and Gerry de Leon will be restored.

According to the newsletter of the FDCP, they are still in the process of finalizing the titles to be restored. The late Gerardo "Gerry" de Leon is best known for films such as Daigdig ng Mga Api, Sawa sa Lumang Simboryo, and Dyesebel. Gerry de Leon, who marks his 100th birthday this 2013, is a National Artist for Cinema like Manuel Conde and Lino Brocka.

Mike de Leon, as the producer and cinematographer of Maynila: Sa Mga Kuko ng Liwanag, was instrumental in the restoration of the Brocka masterpiece specifically overseeing the color correction process. He is a renowned filmmaker in his own right with a filmography including critically acclaimed films such as Kisapmata, Batch '81, and Sister Stella L.

FACES, VOICES AND STORIES OF THE PHILIPPINES. During the September 7 recognition event, it was highlighted that the filmmakers were asked to utilize their respective hometowns as the backdrop for their stories.

During the recognition ceremony, Direk Maryo J. delos Reyes felt honored to be included in this film fest, which he described as a "rare festival of greats."

Mr. Briccio Santos, chairman of the Film Development Council of the Philippines, commended the veteran directors whose "bodies of work have substantially formed part of Philippine cinema heritage for decades."

In his speech, Mr. Santos summed up the goal of the FDCP for launching the annual film festival.

Here is his speech (published in full):

It is with great pleasure that I welcome you to the grand reception of the second annual Sineng Pambansa National Film Festival.

It is our vision at the Film Development Council of the Philippines to build a national cinema that is truly reflective of the diversity and richness of our culture spanning throughout our beatiful archipelago. It is with this vision that we pursue the development and empowerment of filmmakers across our country as to bring focus to the faces, voices and stories in various regions of the Philippines.

This National Film Festival, dubbed this year as the All Masters Edition, features films that have utilized respective provinces through the eyes and stories of Master Directors, whose bodies of work have substantially formed part of Philippine cinema heritage for decades. We are honored to have Mel Chionglo, Maryo J. delos Reyes, Peque Gallaga, Joel Lamangan, Elwood Perez, Gil Portes, Jose Javier Reyes, Lore Reyes, Chito Roño, and Romy Suzara join us in this festival.

These directors have proven themselves through their craft time and time again and we are truly honored to have worked with them in bringing you this roster of magnificent films.

The films included in this festival will tell the engaging stories of our people and put a spotlight on various locations of our beautiful land. Stories such as a retired opera singer in Negros Occidental, a rebellious teenager coming to terms with her family in Quezon, and a struggling writer in Manila, among others. Truly an amazing lineup of films.

We also pay tribute to directors who have helped shape and influence Philippine cinema into what it is today. That is why we are also screening the late Celso Ad. Castillo's Bahay ng Lagim, and recently restored classics, Genghis Khan and Maynila: Sa Mga Kuko ng mga Liwanag, from National Artists Manuel Conde and Lino Brocka, respectively.

We also believe that a truly national cinema is one that is inclusive, open and far reaching.

That as much as it looks back with revenge, it also looks forward with much hope. That is why we include TM Malones' debut feature-length film Salvi in this festival.

The Sineng Pambansa aims to develop the nation's film industry by encouranging and supporting the production and exhibition of quality films. It is our hope to be able to bring Filipino films to more Filipinos. Our partnership with SM Cinemas is definitely a huge step towards this direction.

As such we would like to thank SM Cinemas for their generosity in bringing these films to more than 300 theaters nationwide.


Here are the synopses of the entries included in the 2013 Sineng Pambansa National Film Festival All Masters Edition:

In 1955, the residents of a small idyllic village in Quezon are jolted to discover the dark, disturbing secret of a soldier and his common-law wife. The incomprehensible act takes the protagonists on a six-decade journey to find remorse, retribution, and forgiveness.

Bamboo Flowers talks about the lives of the young and the old Boholanos who have adapted to the changing behaviors of their lifestyles because of the dawning or tourism, technology and the demands of new age.

Sonata is the story of a woman whose whole life is her art, and when she loses it, she loses her hold on the world until a young boy brings it back to her doorstep. The movie features veterans Cherie Gil and Richard Gomez.

Set in the 1970s, two young male NPA warriors find themselves entangled in a web of frustrations, despair, and victory as they struggle to fight for their love in the middle of war against despotism and dictatorship. Lihis is a story of a fight for freedom and against bigotry.

With hopes to reconnect with his roots, Lex returns to Manila and writes a screenplay for an indie film based on his neighbors. In the process, he discovers that his illusions of filmmaking, romance, and the city itself are at odds with the truth.

Twinkle is a rebellious young lady undergoing drug rehabilitation spends time in the company of her adoptive parents -- a retired Army general and his wife -- and her biological father, a former NPA leader with terminal cancer.


Nonoy is assigned to take over the role of monitoring and guarding a number of people who are in their list of voters committed to support their party candidates. Badil is a window into how flawed our basic political right has become.

Teresa has dedicated sixty years of her life to the service of a middle class family at the expense of her own happiness and fulfillment. Now that the family's matriarch has died, the children who were under Teresa's care have to decide on the fate of their aged nanny.