Chris Hemsworth says about playing Formula 1 race car driver James Hunt in Rush: "It was win or nothing." 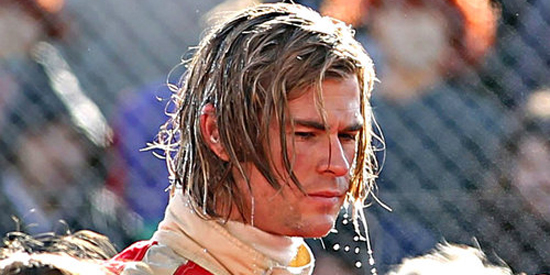 Through his lead role performances in Thor and The Avengers, Australian actor Chris Hemsworth has shot to stardom within the last few years. With the versatility he’s shown in movies from The Cabin in the Woods to Snow White and the Huntsman—not to mention his movie-star wattage—Hemsworth was a natural for McLaren driver James Hunt in Rush released and distributed here in the Philippines by Captive Cinema, showing on September 18.

“James was famous for being a ladies’ man, famous for epitomizing the spirit of the ’70s with a very free lifestyle,” Howard says. “But he was incredibly competitive. He represented the idea that you can be great without making it a business, that a vocation could be some wild form of expression, not just a job. Chris’ performance captures that.”

Howard had not met the actor before casting the part. “Chris won the role with his fantastic audition,” he says. “I’d seen him in Thor and in Star Trek. I met him, I liked him, but I had no idea if he could be James Hunt. He convinced me and everyone involved with the tape that he made while he was on location doing The Avengers. It was remarkable. There was nothing more to say than, ‘Please, sign that guy for the role.’”

While that sort of audition wasn’t remotely what Hemsworth had in mind, he didn’t want to miss the opportunity. “Normally, I wouldn’t have done that unless it was something like this project and for someone like Ron, a director I’ve wanted to work with for years,” says Hemsworth. “He’s one of those people who is as good a person as he is a director. You want to work for Ron because you know every time you hold back a bit, he’s there to challenge you. He knows he can squeeze something else out of it.”

Naturally, performers hope to wrap themselves around a character, but that wasn’t always easy for Hemsworth. Although he and Hunt share the same blue eyes and swagger, there was more to melding the two. “It was interesting to try to pin down exactly who James was,” he says. “In reading different biographies, watching different interviews—depending on what mood he was in—and then speaking to people who knew him, there are varied opinions. I think that’s why it was so fascinating to be around him: He was incredibly passionate, outspoken and a great amount of fun. But he also had a side to him that was bottled up, a sort of dark side. There were contradictions, which make for an interesting character.”

Hemsworth learned that Hunt’s duality was never more obvious than on the track. He provides: “I spoke to one of James’ teammates, and he recalled a conversation he had with James where he said, ‘God, James, those first two laps of the race you were all over the place!’ And James just said, ‘You know, I can never remember the first two laps.’ He had that much adrenaline flowing, and we get all that in the film. He threw up before races and would work himself into a heightened state of tension because he believed that was where his best performance came from.”

The more Hemsworth delved into Hunt’s backstory, the more he was hooked. He says: “The best stuff I found was in the archive footage, little snippets before and after the interviews, when no one realized they were rolling. There are flashes of who James was. There was such fascination in his eyes, a thirst for life. Everything caught his attention. He was like a little kid. They own the environment they’re in and have a need to explore the world and to be indulgent.” Hemsworth pauses: “He didn’t want to drive for second or third place. It was win or nothing. After James won the championship in 1976, he pulled back from it all. I don’t think he felt the same passion.”

Hemsworth wasn’t sure if all of the tales of the infamous playboy were fact or lore. “In Hunt’s biography, it says he’d been with 5,000 women,” he notes. “There’s a classic story in which all the flight attendants who came into Japan were staying at the same hotel James was. This was just before his big race at Fuji for the World Championship. He spent the night with each of them at different times…or at the same time.”

The performer’s research into Hunt’s life—not to mention the sets, costumes and vehicles—made his transformation to 1970s Hunt a comfortable fit. “The period certainly suits my character,” he says. “James belonged in that era. Everything was passionate and indulgent. As Ron kept saying, it was a time ‘when the sex was safe and driving dangerous.’ Now, it’s the other way around. Everything has become so censured and sanitized. It always helps an actor when you’re not trying to convince yourself who you are in that world, when everything around reminds you of it.”