Lovi Poe on love: “I think all of us are capable of being selfish.” 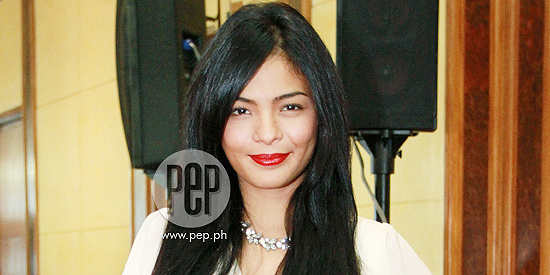 “We all know that it’s not that easy to let go. Kapag meron kang pinagdaanan na malalim with a particular person, mahirap na talagang pakawalan yun.” Explaining the struggle of her “complex” role in the lauded Cinemalaya film Sana Dati, lead actress Lovi Poe says Andrea is one “self-centered” character who had her reasons for being so. Sana Dati, directed by Jerrold Tarog, bag

In the Cinemalaya film Sana Dati, Lovi Poe plays the young bride Andrea who struggles with the emotional baggage she still carries from a past relationship despite being betrothed to her present groom.

The film won Best Film, Best Director, Best Supporting Actor (TJ Trinidad) as well as four other accolades during the 9th Cinemalaya Independent Film Festival. Sana Dati is a romance drama that plays with time and memories of its lead characters as they grapple with their present reality.

“Andrea has her reasons.

“We all know that it’s not that easy to let go.

At the press conference held on Thursday noon, September 19, the Kapuso channel’s “Primera Aktresa” described Andrea’s conflict, which powerfully evokes frustration among the audience while in the thick of the film.

“Well, a lot of people are going through that, e.

“Let’s be honest and not be ano. But then it’s a sad truth,” Lovi observed.

The actress, whose character got involved with three men in the story (played by Paulo Avelino, TJ Trinidad, and Benjamin Alves), admitted that Andrea was “very self-centered.”

Lovi pointed out that it is Andrea’s complicated nature that made her love playing the part.

She added, “Nung pinanood ko siya, my sister was beside me.

“And she's [referring to Andrea] not doing anything!

LOVE CAN BE SELFISH, TOO. Asked if she has previously been “selfish” while in a relationship like her character, Lovi admitted, “I think all of us naman are capable of being selfish. We don’t know it pero may iba’t ibang levels ng pagiging selfish.

Thankfully, Lovi has never been with anyone who was caught up with baggage from a former love.

Admittedly, she said, it commonly happens to other people—“Nagkakabalikan? Siguro may mga moments siguro kayo…”

Is she the kind who still tries to resolve issues from a previous relationship while in a current one?

The relationship ends the moment she decides it has to.

ON JAKE CUENCA, ROCCO NACINO. During the interview, Lovi was asked upfront why things ended so suddenly with her former squeeze, ABS-CBN actor Jake Cuenca.

Lovi and Jake, who dated each other while working on the Joel Lamangan film Lihis, were reported to have called it quits even before they admitted to being an official couple.

“Wala, things happen for a reason. Siguro, we grew separately.

“We both want different things. So, yun.

Asked if she considers Jake the “last” person she was romantically involved with, Lovi smiled and said, “Yeah, practically.”

At the moment, Lovi said she is not in the position to be in a relationship. Not even with her onscreen soap opera partner in Akin Pa Rin Ang Bukas, Rocco Nacino.

“I haven’t considered anybody to be part of my present.”