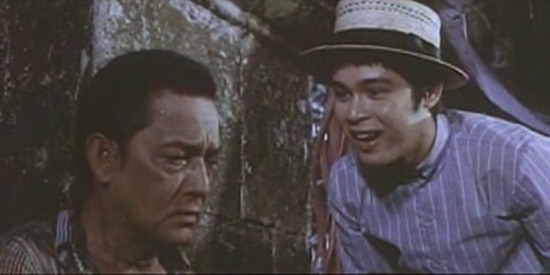 ABS-CBN can be considered a pioneer in the restoration of classic Filipino films.

In a statement provided by the Kapamilya Network’s corporate communications department, it indicated that ABS-CBN is the “first in Asia to do a multiplatform campaign to promote and reintroduce a digitally re-mastered film to the current generation of audiences.”

The said statement pointed out that the digitally-restored film Himala was aired on Philippine television via free-to-air channel ABS-CBN and cable channel Cinema One, released on the big screen with a red carpet cinema premiere, released internationally on pay-per-view via Global TV, and distributed commercially on DVD.

This 360° restoration campaign was considered such a breakthrough that ABS-CBN Film Archives head Leo Katigbak was invited recently to Thailand to present it before members of the Southeast Asia-Pacific Audio Visual Archives Association (SEAPAVAA), an association of organizations and individuals involved in or interested in the development of audiovisual archiving, and served as a model for member archivists to replicate.

“Many restoration efforts stop once the work on the film is completed but that is really only half the process. The more important part is how do you get that new version of the film exposed to a brand new audience that may be experiencing what we did all those many years ago for the very first time,” Katigbak was quoted as saying.

“The restoration campaign of ABS-CBN reflected this, hopefully ensuring that a new generation will appreciate the movies again, and repeatedly for generations to come. Even celebrities like Piolo Pascual, Boy Abunda, Angel Aquino and Maja Salvador believed in the project and gave their full support in bringing our campaign to a mainstream audience.”

In celebration of the 60th year of Philippine television, ABS-CBN Film Archives continues its commitment to collect, preserve, store, and provide access to titles that defined the Philippines’ cinematic legacy.

Katigbak recently bagged the rights from the National Commission for Culture and the Arts to restore the FAMAS and Gawad Urian award-winning film.

“The plan is to get to the classics before they are too badly damaged to be saved and restored. Ganito Kami Noon was always on our short list and fortunately, the film elements we needed to do the restoration were still intact and available and the negotiations worked out for us to secure all the needed rights to do the kind of multi-media, multi-platform campaign that we employed for Himala and Oro Plata Mata,” said Katigbak.

ABS-CBN Film Archives have a lineup of titles to be restored in the coming months and will make individual announcement once the restoration process begins.

The special DVD offers a digitally remastered copy of Oro Plata Mata from the full HD restored version with English and Tagalog subtitles alongside other exclusive features such as director's commentary by director Peque Gallaga, actor's commentary from several of the movie’s original cast, the original sequence treatment submitted to the Experimental Cinema of the Philippines made by Gallaga, the 1982 original trailer with remastered footage, restoration vignettes, and the original story boards used for the movie’s climactic fight scenes.

Set in the province of Negros during World War II, Oro Plata Mata tells the story of how two haciendero families cope with the changes brought about by the war. The title refers to the old superstition that staircases in a house should not end in a multiple of three, in keeping with a pattern of oro (gold), plata (silver) and mata (bad luck). 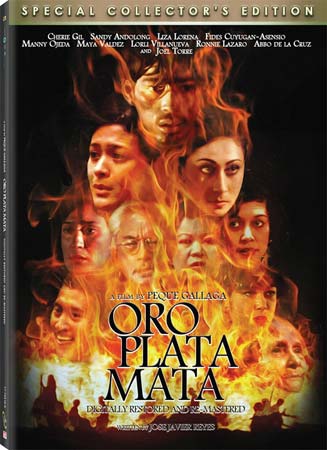