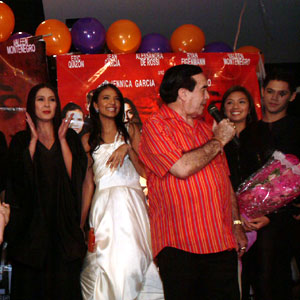 Regal Entertainment proves again that it is a fine maker of horror movies with the excellent first-day run of Hide and Seek, written by Gina Marissa Tagasa and directed by Rahyan Carlos. The film about how a professor and his family are trapped in a haunted house grossed P4 million on its first day, October 31.

Hide and Seek earned good reviews from the Cinema Evaluation Board (CEB) and the press. The CEB gave it a rating of "B," entitling Regal to a 50-percent rebate on taxes. The film was commended for its technical excellence, good storytelling, and fine acting by the cast composed of Eric Quizon, Jean Garcia, Alessandra de Rossi, Ryan Eigenmann, the love team of Jenica Garcia and Mart Escudero. Comedienne Rubirubi, as well as child performers Julijo Pisk and Angel Sy, are also part of the cast.

Noted film critic Mario Bautista pointed out that Jenica Garcia delivered her role well in the dramatic moments. Jenica played Nica, daughter of Leah (Jean Garia), who had a conflict with her stepfather Oliver (Eric Quizon) who was accused of raping and killing a college student (Valeen Montenegro).

Raves were given to Eric, Jean, and Ryan who are always outstanding. Kudos also went to Julijo and Angel who shone in their roles and to Rubirubi playing the yaya who almost stole the scene with her antics and good timing.

Fans are celebrating the success of the big-screen debut of Mart and Jenica. The chemistry they displayed in the movie confirms that Mart and Jenica are indeed a tandem to watch for.

Hide and Seek also had a memorable premiere night at Megamall last Sunday, October 28. The entire cast (except Eric who is abroad) came in full force. Marian Rivera, who is making waves in the top-rating soap opera Marimar, also attended to support all the stars, especially Mart who is her fellow talent in the stable of manager Popoy Caritativo.

Numerous Halloween fanatics of all ages participated in the Hide and Seek costume contest held during the premiere. There were ghosts, monsters, white ladies and many more enchanting creatures. The top cash prize was awarded to a youngster who came dressed as a tiyanak inside a jar. The premiere night was hosted by no less than The Master Showman German Moreno.

Hide and Seek is now showing in theaters nationwide.