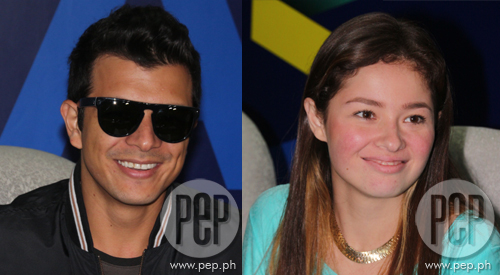 Jericho Rosales and Andi Eigenmann sat down for the story conference of their movie, Aba Nakakabasa Na Pala Ako?!, at the Viva Films office in Ortigas last September 26.

Andi is thrilled to be finally given the chance to work with Jericho, who happens to be her big crush when she first entered showbiz.

Hence, the 23-year-old was really flattered when told that Jericho mentioned in a previous interview that he’s impressed by her versatility as an actress.

ROLES. Aba Nakakabasa Na Pala Ako?! is a film adaptation of Bob Ong’s autobiographical novel, which revolves around the joys and inanities of high school life.

In the film, Jericho plays a mild-mannered teacher who’s stuck with the pangs of his first love.

On the other hand, Andi plays "the One who got away” in Roberto’s life.

NO REGRETS. Speaking of childhood memories, the two lead stars were asked what part of their life would they like to change if given the chance.

Jericho admitted that he could somehow relate to his role in the movie because he once had an unrequited puppy love.

At 34 though, Jericho felt blessed to have found his perfect match in his fiancé Kim Jones.

On her part, Andi maintained that she has no regrets with the way her life turned out.

“Para sa akin, natatakot ako. Ayoko palitan kahit na maliit man na bagay na nangyari sa past ko. Kasi feeling ko, my life wouldn’t be the same had I changed something. And I like the way my life is now, especially that I have Elle [Andi’s daughter, who’s turning two years old in November]. So, wala akong regrets,” Andi stated.

Directed by Mark Meily, Aba Nakakabasa Na Pala Ako?! is slated to be released in theaters next year under Viva Films.