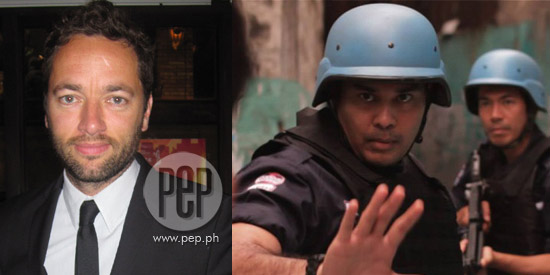 Sean Ellis is in the country to raise awareness about his film Metro Manila, a crime drama he describes as his "love letter to the Philippines."

Ellis wrote and directed Metro Manila, which will represent the United Kingdom in the Best Foreign Language Award category in the 86th Academy Awards.

(Read: Metro Manila to represent the UK while Ilo Ilo will represent Singapore in the Oscars)

Ellis told PEP.ph (Philippine Entertainment Portal) there are plans to do a remake of Metro Manila: "Yeah, there is a remake in the works. At this point, I don't know where it's going to be set and how much I am going to be involved."

He said 20th Century Fox is planning to remake the film, but it will not be in Manila. "It might be set somewhere like India or South America."

The film is about a couple (played by Jake Macapagal and Althea Vega) who leave behind their life as farmers in the Banaue rice terraces to try their luck in the chaotic city of Metro Manila. Jake's character lands a job as an armored truck driver only to be blackmailed later by his partner (played by John Arcilla).

Metro Manila will be screened in Philippine cinemas starting October 9.

The British director, who is an Oscar nominee for the short film Cashback (2004), started shooting Metro Manila in December 2010.

Where did he get the idea for Metro Manila?

"The inspiration came to me while I was in holiday in 2007. I visited the city of Manila and I was struck by its vibrance and energy. It was something that was very culturally alien to me.

"I witnessed two armored truck drivers having an argument on the street. It was that thing that made me think, 'Wow! I'd like to make a movie here.' It was that scene that became the seed of the movie."

On this trip in the country, his fifth, he voiced his wish to become an honorary Filipino. When asked if he has plans to do another movie in the Philippines, he answered:

"I'd love to. I like to think I would become an honorary Pinoy. My connection to the Philippines is a very strong one."

The British director does not speak Tagalog but, he said, he considers it liberating to direct stars who deliver their dialogue in the vernacular.

"For me, it was a very freeing experience.

"Thirty percent of language is non-verbal.

For Metro Manila, Ellis had an English script but he relied on the actors to translate the lines into Tagalog.

"I felt like we needed to shoot it in Tagalog so that Filipinos would embrace it as their own. It is a Filipino film as much as it is a British film," he said.

"If we filmed the movie in English, it wouldn't be authentic so it meant that the film had to be in Tagalog."

On foreign film companies that want to shoot in the Philippines, he said, "I think the Philippines has a great history of supporting American productions. If you go back, there's Francis Ford Coppola's Apocalypse Now, The Year of Living Dangerously, and recently, Bourne Legacy.

"There is a real history of supporting foreign productions. Who wouldn't want to film here?

"It's a fantastic opportunity, there are great locations, great support crew, and they are very trainable in the American system, which is a great thing. English is the second language so what's not to like?"