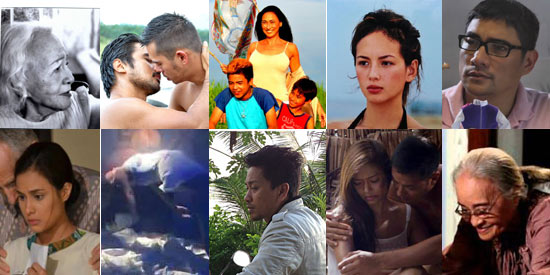 The Sineng Pambansa All-Masters National Film Festival will be extended and screened at the Shangri-la Cineplex from the 11th to the 27th of October. Each film by the master directors will have a day and a cinema completely devoted to the showing of their films. Standard ticket prices will apply.

The proceeds of the film screenings will go to the building of a National Film Archives in Tagaytay.

Here is the schedule of all-day screenings for each film:


According to a recent blog article by journalist Jessica Zafra, “what a filmmaker needs is the freedom to make the film his/her way.”

The Sineng Pambansa Film Festival provides the audience with 10 films that master directors have wanted to shoot. Initial reviews from the first screening week of the film festival are as follows:

“Director Chito Rono proves that even with a limited budget of P1.5 million from the Film Development Council of the Philippines, one can create a film with beautiful cinematography, exciting editing, artistic depth and national significance. Now that is a true master."
- Fred Hawson’s review for Chito Roño’s Badil

“Throughout the movie you may find yourself asking, "What the hell is going on?" and it is to the filmmaker's credit that walking out of the cinema is not a real option.”
- Jessica Zafra’s review for Elwood Perez’s Otso

“The acting is commendable. Newcomer Ellen Adarna convincingly portrays the conflicting emotions and growing pains a teenager feels. Arnold Reyes as Ka Ruben stole the movie. He is the heart of the story. As a man who lost his daughter, Arnold makes you feel the emotional baggage that he carries in every scene.”
- PEP.ph’s review for Gil Portes’ Ang Tag-araw ni Twinkle

“The screenplay by Aloy Adlawan takes vignettes of narratives that exemplify how life here, filled with dreams, hopes, fears and disappointments, takes on a universal hue that we all can identify with… The ensemble cast comes through with flying colors.”
- Philip Cu Unjieng’s review for Maryo J. de los Reyes’ Bamboo Flowers

“…The maturity of the filmmakers’ artistry ultimately makes sense of the story’s inexplicable music about love and mortality.”
- Rianne Hill Soriano’s review for Peque Gallaga and Lore Reyes’ Sonata

“It might have been talked about because of its graphic depiction of homosexuality, but the film goes beyond its perceived shock value, as it tries to tackle various aspects of social inequality and oppression.”


“Ano ang Kulay ng mga Nakalimutang Pangarap? puts such well-regarded values like family ties, loyalty, devotion, dedication and responsibility to the test, with the family home becoming a haunted courtroom of sorts as it turns into a venue for deciding the fate of the household help.”

“The computer graphics were very well done it was very realistic... [Celso Ad Castillo’s] followers did a great job spicing up this unreleased film and for that, it is worthy of its place in the National Film Fest.”

“The subject is treated with sympathy and understanding. A man’s search for the true love of another man.”
- Tempo.com.ph’s review for Romy Suzara’s Tinik

“The film explores the darker side of relationships, of love and lust, and intensifies our film experience by layering it with a coming-of-age tale that reverberates in the life of a young barrio boy, even as he reaches adulthood.”
- Philip Cu Unjieng’s review for Mel Chionglo’s Lauriana


Here are the synopses of the entries included in the 2013 Sineng Pambansa National Film Festival All Masters Edition:

In 1955, the residents of a small idyllic village in Quezon are jolted to discover the dark, disturbing secret of a soldier and his common-law wife. The incomprehensible act takes the protagonists on a six-decade journey to find remorse, retribution, and forgiveness.

Bamboo Flowers talks about the lives of the young and the old Boholanos who have adapted to the changing behaviors of their lifestyles because of the dawning or tourism, technology and the demands of new age.

Sonata is the story of a woman whose whole life is her art, and when she loses it, she loses her hold on the world until a young boy brings it back to her doorstep. The movie features veterans Cherie Gil and Richard Gomez.

Set in the 1970s, two young male NPA warriors find themselves entangled in a web of frustrations, despair, and victory as they struggle to fight for their love in the middle of war against despotism and dictatorship. Lihis is a story of a fight for freedom and against bigotry.

With hopes to reconnect with his roots, Lex returns to Manila and writes a screenplay for an indie film based on his neighbors. In the process, he discovers that his illusions of filmmaking, romance, and the city itself are at odds with the truth.

Twinkle is a rebellious young lady undergoing drug rehabilitation spends time in the company of her adoptive parents -- a retired Army general and his wife -- and her biological father, a former NPA leader with terminal cancer.

Nonoy is assigned to take over the role of monitoring and guarding a number of people who are in their list of voters committed to support their party candidates. Badil is a window into how flawed our basic political right has become.

Teresa has dedicated sixty years of her life to the service of a middle class family at the expense of her own happiness and fulfillment. Now that the family's matriarch has died, the children who were under Teresa's care have to decide on the fate of their aged nanny.