Edward Mendez on kissing scene with Marian Rivera: "It’s a big privilege for me to kiss someone that beautiful.” 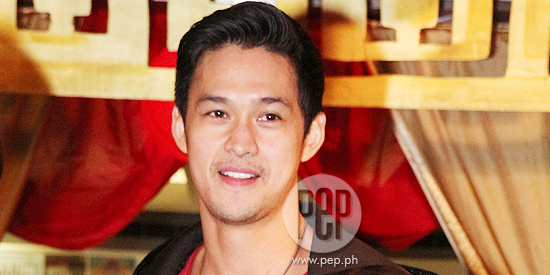 Edward Mendez was impressed by his two leading ladies in Kung Fu Divas. While Edward Mendez was wowed by Marian Rivera for her unexpected knack for comedy, Edward found Ai-Ai a natural talent. He says of the latter who is currently single: “Kahit sino naman ma-i-in love kay Ai—sa personality niya, as a person … I think a lot of people are in love with her, in general. Napaka-beautiful person niya in and out.”

Unlike other martial arts film that feature the archetype of a wise old sage training the heroes, the movie Kung Fu Divas features a pectoral-popping, drop-dead gorgeous hunk as a kung fu trainer.

Model-turned-actor Edward Mendez is cast in the action-comedy as Kojic, mentor of Marian Rivera and Ai-Ai delas Alas’s characters.

In the film, Kojic significantly draws together Samantha (Marian) and Charlotte (Ai-Ai), initially rivals in a beauty pageant, and reveals their destined quest as twins who possess kick-ass kung fu skills.

Kojic’s character is Edward’s first starring role in a film. Add in the fact that the 29-year-old actor gets to work with Marian and Ai-Ai, major actresses of rival networks GMA-7 and ABS-CBN, the movie project certainly puts Edward’s career right on track.

In an interview during the film’s red carpet screening, October 1, at Cinema 7, Megamall, Edward said that Kung Fu Divas is the break he has been waiting for. “Isang pangarap na naging reality” was how he put it.

Post-premiere screening, the actor said that he has yet to absorb everything.

“Siguro the next day ko pa mari-realize lahat," admitted the actor who has been accepting bit roles since he was 19 years old.

“Being able to do the acting with two of the biggest stars sa magkabilang network. Sobrang overwhelmed ako!”

He recognizes the project as a blessing. Despite the number of actors considered for the role, director Onat Diaz and the film’s producers—Star Cinema, Reality Entertainment, and The O&Co. Picture Factory—took a chance by choosing Edward as the leading man.

“Hindi ko in-expect kung ano mangyayari. I got lost pa for an hour so I had to look for a place.

The ability to pop his pectorals (chest muscles) was not a part of the audition, Edward clarified.

“Sabi niya, ‘Kaya mo bang paggalawin?’ Sabi ko, ‘Yeah, I used to do that before… a long time ago.’

KISSING SCENE WITH MARIAN. Dingdong Dantes, Marian’s actor beau, was present during the premiere screening of Kung Fu Divas, which means he caught Marian and Edward’s kissing scene towards the end of the film.

“Si Dingdong is a nice guy. We know each other matagal na so he knows naman very well [that it’s work].

The actor admitted that he was nervous the entire time they were filming the said scene.

He added, “I guess it’s a big privilege for me to kiss someone that beautiful.”

DYNAMIC DUO. While shooting Kung Fu Divas, Edward got to know his leading ladies whom he said are “unique in their own ways of acting” and “both funny.”

He was amazed that Ai-Ai was a natural, comedy being her forte. On the one hand, Marian impressed Edward with her unexpected knack for comedy.

EDWARD ON AI-AI. At the grand press conference of Kung Fu Divas days before the film premiered, Ai-Ai made a provocative remark regarding Edward’s manhood. The comedienne mentioned how “gifted” the actor is that she and Marian would often get distracted when shooting a scene.

“I just take it as a compliment kung ano man ibig sabihin nun completely,” he said during Tuesday night’s interview.

When asked whether there’s a possibility that he would see Ai-Ai as more than a co-actor, Edward answered, “Well, kahit sino naman ma-i-in love kay Ai—sa personality niya, as a person, you know.

“I think a lot of people are in love with her, in general. Napaka-beautiful person niya in and out.”