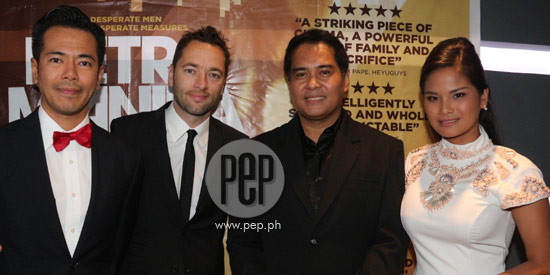 British director Sean Ellis (second from left) turned down offers from producers to have Westerners star in his film Metro Manila in exchange for funding. The Oscar-nominated director explained, “I wanted the film to be authentic. It’s a Filipino story and I didn’t see any role for a Westerner. So, I wanted it to be predominantly Tagalog and so I kept it authentic in that sense.” He is joined in this photo by the stars of his

This heist drama was directed and produced by British national Sean Ellis who co-wrote the screenplay with Frank E. Flowers.

Starring an all-Filipino cast, this critically acclaimed film was chosen by the United Kingdom as its entry to the Best Foreign Language Film category of the 2014 Academy Awards.

Sean, who earned an Oscar nomination for his 2004 short film Cashback, has been to the Philippines several times already and in fact, he expressed his desire to become an “honorary Filipino.”


(Read: Sean Ellis: “I like to think I would become an honorary Pinoy. My connection to the Philippines is a very strong one.")


The British director spent 35 days to shoot principal photography in the Philippines in November 2010 and dedicated eight months to editing the movie.

The film is about Oscar and Mai (played by Jake Macapagal and Althea Vega), who leave behind their land in the Banaue rice terraces and bring their two children to search for a better life in the city.

In Metro Manila, they fall prey to unscrupulous characters and are forced out of desperation to make difficult choices. Mai eventually becomes a bar girl while Oscar is hired as an armored truck driver transporting valuables to individuals.

Oscar’s senior officer Ong (played by John Arcilla) blackmails the family man into opening a safety-deposit box that could secure their future.

“It’s always lovely when a film is received by its audience and I mean, I’m just happy to be in the Philippines showing the film here,” Sean told PEP.

Sean pointed out, “Genuinely, that reaction comes from the people who haven’t seen the movie.

“Because, this film is not about poverty to me. It’s about the choices you have to make in situations where there are no choices.”

“They’re all incredible,” Sean told PEP. “They give the film its power and so, I think you’ll see performances that you’re not really used to seeing I think, because these performances are very heartfelt but not in a soap opera way...the performances they gave are really just incredible.”

A lot of the scenes were shot in Manila’s slum areas. One of their main locations was Tondo, a place known for having one of the highest crime rates in Manila.

Did he have concerns about security before shooting in Tondo?

“I was, to begin with,” admitted the Metro Manila director.

He continued, “But when I went in there, I wasn’t at all because I found the people in Tondo to be amazingly welcoming and very enthusiastic about the crew being there and making the film.

“They were very excited to have us there and they were just very supportive.”

While on holiday in the Philippines in 2007, he saw two employees of an armored truck company, in full combat mode with M16 guns, bulletproof jackets and Kevlar helmets, screaming at each other.

“My first week, I witnessed two armored truck drivers having an argument on the street; it ended with one of them kicking the tire in frustration, then they got in and drove off. I was wondering what they were arguing about. It was so intense I thought they were going to shoot each other,” Sean disclosed during an intimate press con with the Philippine media.

This scene left such an impact on Sean that when he returned to Britain, he was prompted to develop a 20-page synopsis. He then went to Los Angeles to flesh out the script with his friend Frank E. Flowers.

Since the script was in English, Sean relied on the actors to translate their lines to Tagalog.

The writer/director felt very strongly about shooting in Manila even though he did not speak Tagalog and he had few contacts in the Philippines.

“I’m a great believer in the laws of creation. I was given this idea on the streets of Manila, and I wanted to be faithful to that idea because I felt that this idea was given to me as a gift.”

Sean even turned down offers from producers to have Westerners star in his film in exchange for funding.

“When I was looking for financing, American producers would be asking, ‘Could we put a Westerner in it?’ No, that’s not the idea I’m following. The other idea was shooting it in Tagalog. I felt it needed to be in Tagalog because I wanted Filipinos to embrace it as their own. I want them to think of it as a Filipino film as much as it is a British film.”

LONG ROAD TO BANAUE. Sean recalled their 18-hour trip to Banaue that left him terrified.

“Originally when we got here, the script was, ‘Exterior: rice field, family takes train to Manila.’ My production manager looked at it and asked: ‘What exterior rice terraces are you looking for?’ I said, ‘Where’s the most beautiful?’ The production manager said, ‘Banaue.’

“So I go online to look for Banaue and someone said, ‘I can be quicker than that.’ She brought out a thousand-peso bill and pointed out, ‘That’s Banaue!’

“The production manager tells me, ‘There’s no train from Banaue. They take the jeepney.’ What’s that? ‘Those things that look like World War II jeeps that have been chromed and painted over.’

“One thing I love about Filipinos is the way they drive. They drive like they walk so if there’s a space, they just get in.

“And if you’re overtaking, it’s up to the other person to slow down. Where we come from, you only overtake if there’s a space.”

“I remember being in this van, driving up to Banaue with a driver who had a bit of a tic, had his eyes shut quite all the time, and he was overtaking 18-wheelers on the wrong side. I was thinking, ‘We’re gonna die before we get to Banaue.’

“Luckily, the incoming traffic pulled off the road at the last moment and we were okay. We got to Banaue 18 hours later.”

When asked if he was traumatized by the incident, Sean told PEP, “No, no, I’m not traumatized. I’m actually… I’ve never had an accident here.”

GHOSTS IN BANAUE? Another incident that the British director had to deal with was the ghost encounters that they had in Banaue.

“We got to Banaue and there was a ‘brownout,’ as you like to call it.

“Everyone in town was walking around with candles. It was really spooky, like something out of a David Lynch movie. Then we got delivered to this most haunted hotel, you can imagine. I woke up in the morning and the production manager was, ‘We’ve got a big problem.’ I asked, ‘What’s wrong?’ She said, ‘About three or four of the crew had ghosts sitting at the end of their beds.’ And I was like, ‘Are you kidding me? Ghosts?’ So she said, ‘Yeah, you better speak to them, they’re a bit worried.’

“I went to visit them in the hall, and literally, there were 10 people huddled together in the middle of the room, looking like a scene from Scooby-Doo,” the British director narrated with a laugh.

“So we left and we went to our first location. There was one of these traditional Indians saying, ‘The spirits don’t want you here.’ That was the first thing he said when we got out of the van.”

Jake Macapagal, who was with Sean at that time, asked the director: “He was speaking in English?”

Sean quipped: “No. Someone translated it. He had subtitles. I was like, ‘Yeah, whatever. Here’s my permit.’”

Another mysterious incident happened while they were shooting at the rice terraces.

“Ten minutes later, one of our cameras, which was on a tripod and no one was standing near it—the legs had almost just failed, it was about 10 meters from where it was—and it was sinking into the rice fields. So I ran out and pulled the camera out of the rice fields. At that point, I joined in on the prayers to try and get rid of the ghosts of Banaue. I was like, ‘Okay, we’re supposed to be here five days, let’s do it in three. Let’s get the hell out of Banaue!’

“It’s kind of a spooky place but utterly beautiful.”

Metro Manila and Himpapawid have one thing in common: they both feature the true story of Reginald Chua who hijacked Philippine Airlines flight 812. Reginald worked for his father, who owed a silk factory that closed because of their rivals. With mounting debts, Reginald hijacked the plane’s passengers at gunpoint. After stealing all the passengers’ money, he jumped from the plane with a handmade parachute made from the silk of his father’s company.

Raymond Red makes the hijacker a central figure in Himpapawid but Sean Ellis presents the story as a subplot in Metro Manila.

When asked if Sean was aware about the film Himpapawid, he revealed:

“I read a news article that said Reginald Chua was found four days later, buried up to his waist in mud surrounded by money, with the silk parachute of his father’s factory billowing in the wind behind him.

“When I read that, it was such a powerful and potent image in my head. It was so poetic as well and I wanted to include that in the film.

“It turns out that Raymond Red had done a film about it as well. I spoke to Raymond and Raymond showed me his film because I didn’t want to do anything that he had already done. I watched the film hoping that he didn’t have that same visual as the lilac parachute billowing in the wind. He chose a different angle of the same story.”