MOVIE REVIEW: Mr. Go: A feel-good movie for the family 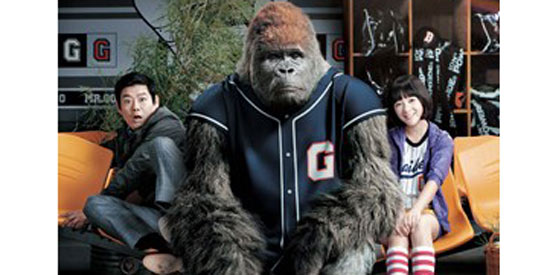 Mr. Go is a hearwarming movie for all ages. This Korean film depicts a special bond between a gorilla and a teenage girl, and their capacity to love beyond boundaries.

“Worth it,” “good,” and “enjoyable.” These were some of the praises I overheard from other viewers after watching the Korean family movie Mr. Go.

The premise of a gorilla becoming a baseball sensation may not appeal to everybody, but this adventure movie proves to be worth watching, because it has all the right elements of a quality family-adventure film.

THE PLOT. This Korean film tells the story of Wei Wei (Xu Jiao), a smart girl raised in the circus.


Growing up, she follows the footsteps of her grandfather, who is a ringmaster.


Wei Wei's constant companion and guardian is the circus gorilla named Ling Ling. The two have been inseparable since Wei Wei was a baby.

When her grandfather dies, Wei Wei is left with a huge debt that she needs to pay, or she loses the circus—which is home not only for Wei Wei and Ling Ling, but for a lot of children as well.

Opportunity knocks when a scheming agent named Doosan (Sung Dong-il) offers the teenage girl a deal: she can earn money if she allows the gorilla Ling Ling to become the batter of a baseball team.

Eventually, Ling Ling becomes a baseball sensation known as Mr. Go because of his perfect swing.

Wei Wei’s goal to raise money to pay the debt is within her reach, and Doosan is on the verge of closing a deal with a sponsor for a huge profit in the baseball industry.

However, it is their respective ambitions that threaten to destroy the relationship of Doosan, Wei Wei and Ling Ling.

Will they give in to their ambitions or will they stick to the bond that they have formed in their journey together?

REVIEW. The film is fully dubbed in English, but the dubbing that does not synch with the mouth movements.

Mr. Go has a good storyline conveying the tendency of humans to become beastly and the capacity of beasts to be more humane.

It also explores the capacity of men and beasts to love beyond boundaries, and the value of relationships in different levels.

Kudos to the filmmakers for the smooth editing, impressive musical scoring, and seamless special effects.

Even though the plotline may seem predictable (as expected in a family movie), it ups the ante by taking the story a little further.

Mr. Go has all the right ingredients to get you hooked, definitely making it a film for all ages.

While it is sure to appeal to youngsters as an adventure movie, its underlying messages speak of universal truths that touch the hearts of viewers.

Directed by Kim Yong-hwa, Mr. Go is now being screened in SM Cinemas.