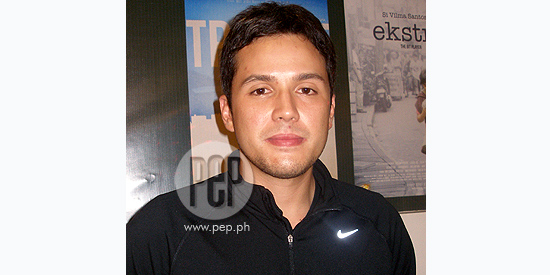 Transit, which was chosen as the Philippines’ entry to the Foreign Language Film category of the 2014 Oscars, received support from Hollywood producer Dean Devlin (of Godzilla and Independence Day fame). Transit producer Paul Soriano (in photo) says that Devlin and his production company Electric Entertainment acting as sales agent, ups the film’s chance of seizing an Oscar nomination

Hannah Espia’s diaspora drama Transit has certainly stirred Filipino-American producer Dean Devlin enough for him and his production company, Electric Entertainment, to pick up the sales rights of the film.


Starring Jasmine Curtis Smith, Irma Adlawan, Ping Medina, and child actor Marc Justine Alvarez, Transit is the Philippines’ official entry to the Best Foreign Language Film category of the 2014 Oscars. The film is about a Filipino
migrant family in Israel facing the threat of deportation because of a new law implemented by the Israeli government.

In an interview with PEP.ph (Philippine Entertainment Portal) last Saturday, October 26, at the Nuvali Outdoor Film Festival, Transit producer Paul Soriano remarked on the help from Hollywood that the Cinemalaya award-winning film received early this month.

“His vision is he wants to show it to the world. He is quite a name in Hollywood so he is making the phone calls for us.

“To have a name like Dean Devlin on Transit just brings us to a world class level.

Devlin’s involvement certainly adds a boost for Transit in its Oscar campaign.

Paul revealed that he and Transit director Hannah Espia will be flying to Los Angeles to meet with Devlin and the rest of the Oscar campaigners in November.

TOP 22 CONTENDER. AwardsCircuit.com, a reputable film website that has previously predicted the Oscar victories of entries, currently positions Transit among the top 30 contenders in the Best Foreign Language Film category. As of today, October 29, Transit is ranked in the 22nd place.

Asked for his personal forecast, Paul relayed that he, of course, wants Transit to win.

“That’s my attitude! I think that’s the attitude of every film, right?

“Right now, I’m just doing my best as a producer to have the best chance of winning.

RESPECT FOR ERIK MATTI. The selection of Transit by the Film Academy of the Philippines (FAP) as the country’s official entry to the Oscars was earlier questioned by filmmaker Erik Matti, whose lauded action film OTJ was also a top pick along with Brillante Mendoza’s Thy Womb and Jeffrey Jeturian’s Ekstra.

Matti made a claim that a few politicians “lobbied” for OTJ not to be picked because it puts the country in a bad light considering its theme on corruption.

The allegation was dismissed by FAP selection committee head Peque Gallaga, who stated that “There was no politics at all in the selection process. I find the insinuations insulting.

“We did our work professionally, responsibly and we sat down intelligently to discuss the merits of the potential entries Thy Womb, On the Job and Transit.”

(Read: FAP defends choice of Transit for 2014 Oscar Awards: “There was no politics at all in the selection process.”)

Paul, in his Saturday interview with PEP.ph, commented on the issue, initially stating that he has nothing but respect for Matti who helped him when he was starting as a filmmaker.

He added that he upholds the FAP’s decision as well.

“I think we just have to respect that. You know, Direk Peque is also a friend of mine and I have nothing but respect for Direk Peque and Direk Erik.

“They’ve actually paved the way for filmmakers like me to be able to have a voice in cinema.

“So, whatever is the struggle or the problem is, I’m out of that.”

Paul shared that he and Direk Erik, in fact, spoke to each other after remarks were made about the selection of Transit.

“He says there’s nothing against Transit,” told Paul.

“If you read between the lines, I know where he’s coming from and it has nothing to do with Transit.

“So, [I have] nothing but respect for Direk Erik and Direk Peque.”