Pororo, The Racing Adventure to open in Philippine cinemas on November 6 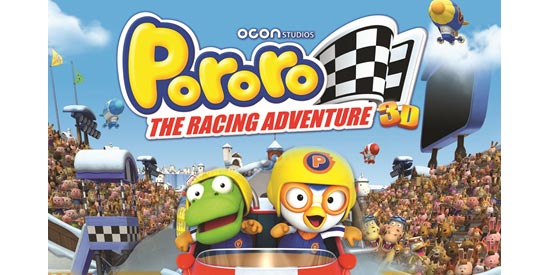 "Ask any pre-schooler about Pororo and chances are they know the little penguin who hails from the snowy village of Porong Porong Forest.

"Pororo is a computer-generated cartoon series created by Iconix Entertainment. Pororo has been airing in Korea since 2003 and has been a consistent favorite of pre-schoolers. The show revolves around the characters meeting challenges and overcoming them with a moral lesson to be learned after each episode. The cute character also has a strong following with teenagers. Pre-schoolers would call him “President Pororo” while teens would tag him as “Pororo the god.” Pororo already has six theme parks in Korea with five more to open soon. In 2015, a Pororo theme park is set to open in Los Angeles, California by next year. The Pororo series is also nominated in the Kids: Preschool category in the 2014 International Emmy Awards. The character is already being likened and dubbed as the “Mickey Mouse of Asia.”

"Locally, Pororo is well liked and lords it over its competitors in their timeslot during morning weekdays in Disney Junior and early morning weekends in GMA-7. The show even attracts teens and tweens aged 10 to 17 years old. The program has been a surefire bonding experience between parents and their young kids.

"On November 6, 2013, Philippine cinemas nationwide will be featuring Pororo’s first animated 3D movie: Pororo, The Racing Adventure. The story revolves around Pororo and his friends going to the magical winter wonderland of Northpia to participate in the Super Sleigh Grand Prix where they will be pitted against other more experienced racers not to mention the brown bear team who would rather cheat in order to win. Along the way, Pororo and his friends learn the value of true camaraderie, loyalty and courage.

"The movie which will be both in 3D and 2D digital formats will be a very good movie for the whole family.

"Reality Multimedia is part of the Revolucion Media Group (http://revolucion.com.ph), a fully integrated production company (TV commercials, movies, post production, and visual effects, among others). Reality Multimedia is a boutique acquisition and media distribution company that introduces films which call out to the discerning moviegoer. It acquires the exclusive rights to high quality and critically-acclaimed international films. Reality Multimedia also partners with the top TV networks in the Philippines such as ABS-CBN, GMA, and Solar Entertainment to maximize reach and distribution. It is headed by CEO Leo Po and President Dondon Monteverde. It’s sister company, Reality Entertainment (http://www.reality.com.ph), produced and released the highly successful Tiktik: The Aswang Chronicles which starred Dingdong Dantes.

"In 2013, the company produced On The Job, the critically acclaimed action thriller by Eric Matti, starring Piolo Pascual and Gerald Anderson, which premiered last August 28. They also produced the Ai-Ai Delas Alas and Marian Rivera starrer, Kung Fu Divas, which was released last October 2. Reality Multimedia distributed the critically acclaimed Before Midnight which was the third movie in the “Before…” series which starred Ethan Hawke and Julie Delpy last July 2013. The movie is considered one of the most beloved love story movies of all time. Last August 2013, they also distributed the strong Academy Award contender for 2014, The Butler which boasted of a powerful all star cast led by Forest Whitaker and Oprah Winfrey. The movie, based on the life story of Eugene Allen, is a historical take on the civil rights movement through the eyes of a butler who served in the White House for 7 administrations. It also exhibited the English-dubbed Korean film, Mr. Go which featured the first ever Asian digital character which is a computer generated gorilla who played baseball in the Korean Major Leagues which was released last October 16."