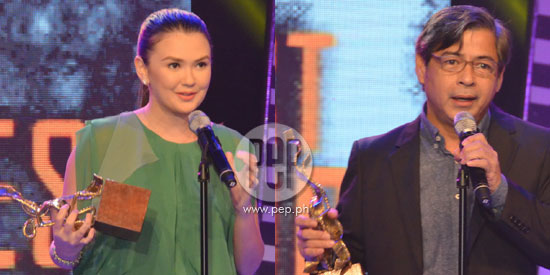 Angelica Panganiban (left) and Joel Torre (right) win Best Actress and Best Actor, respectively, in the Plus category of the 9th Cinema One Originals Festival.

Alamat ni China Doll, the story of a young woman named Helen (Angelica Panganiban) whose wanting for a new life gets disrupted by an eager journalist’s controversial article, was the night’s biggest winner for the Plus category. Aside from Best Picture, it also took home five other awards, including Best Actress, Best Cinematography, Best Editing, Best Music, and Best Sound.

In the awards given for the Currents category, Bukas Na Lang Sapagkat Gabi Na, a narrative of related occurrences during the time of Martial Law, dominated alongside Riddles of My Homecoming, Arnel Mardoquio’s silent film that tackles the traditional beliefs of the Lumads and Moros of Mindanao.

The Best Actress award for the Currents category went to Vivian Velez for Bendor, and the Best Actor award went to the Saturday Night Chills main trio composed of Rayver Cruz, Matteo Guidicelli, and Joseph Marco. The Best Supporting Actress award went to Anna Luna for Bendor, while the title of Best Supporting Actor went to David Chua, also for Saturday Night Chills.

This year’s festival also honored two of today’s most important icons in the realm of Philippine Cinema—director Elwood Perez and Mother Lily Monteverde, who were both named recipients of the Cinema One Tribute.

10TH EDITION OF CINEMA ONE. The Cinema One Originals Festival 2013 was brought to you by Cinema One cable channel.

Cinema One is now accepting entries for next year's Cinema One Originals Festival which shall mark the festival's first decade. All submissions should be complete full scripts for a feature length film.

The film script should tackle a commercially viable subject with universal themes. The filmmaker submitting these script entries should be ready to discuss the sellable and marketable points of the proposed film project.

From all submissions, ten finalists will be selected and will be given a production budget of P2 million each, the highest budget given by any institution or festival in the country.