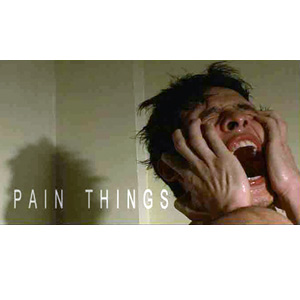 The Cinemanila 2007 entry Pain Things, written and directed by Jon Red, will be screened from November 14 to 20 at the IndieSine of Robinsons Galleria.


The indie film Pain Things, written and directed by Jon Red, will have its regular screening on November 14 to 20 at the IndieSine of Robinsons Galleria, Ortigas Center, Quezon City. It was one of the five entries to this year's Digital Lokal of the 9th Cinemanila International Film Festival.

This 60-minute digital film is the seventh full-length work of Jon Red, who studied painting at the Philippine High School for the Arts and the University of the Philippines. He attended film workshops at the Mowelfund Film Institute. Jon is known for writing the screenplay of Ilusyon (2005) and for directing the surreal film Cut (2005).

SYNOPSIS. Color-blind: Frank (Christian Vasquez) struggles to finish his documentary on the painter Benjie, whom he looks up to. He wants to become Benjie (Michael de Mesa).

Love is blind: Frank is seduced by Julia, who lives with Benjie. But in reality, he misses Jenny, who just left him.

Heart-wrenching. Mind-boggling. What is essential is visible.

Written and directed by: Jon Red