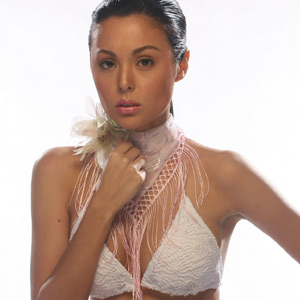 Nancy Castiglione (in photo) plays the role of Sandra, the wife of the young architect Louie (Luis Alandy). Signos, which is written and directed by Aloy Adlawan, is cited as the Best Foreign Film in the recently concluded Lone Star International Film Festival.

Pinarangalan ng U.S.-based organization ang Signos (The Sign) bilang Best Foreign Film in the main competition where around 30 movies competed. The other winners include The Elephant King of the U.S.A. as Best Narrative Feature, Good Riddance as Best Texas Film, The Fighting Cholitas from Bolivia as Best Documentary Short, Dear Sweet Emma as Best Animation, Darius Goes West from the U.S.A as Best Narrative Short, and Companions to None from Mexico as Best Humanitarian Film.

Special award recipients Martin Sheen and Robert Rodriguez were part of the board of judges headed by another Hollywood actor Bill Paxton.

SYNOPSIS. Louie (Luis Alandy), a young architect, receives a text message from the province that his father, Ulding (Ricky Davao), had a heart attack. Louie leaves behind his wife Sandra (Nancy Castiglione) in Manila but finds out that the message was nothing but a prank. Louie then senses something eerie about his hometown. He finds out there have been several killings in the barrio, all done in the same manner. Apparently, the victim first hears some rumbling noise; that is, before they are found dead all covered with mud.


Louie learns that his childhood sweetheart, Elma (Chx Alcala), is one of the victims. He visits her wake and is forced to confront an unresolved issue with Elma's husband, Nestor (Lauren Novero), who was once Louie's best friend.

Meanwhile, Sandra find out that she is pregnant and when she informs her husband that he would be a dad soon, their cell phones malfunction, making it part of the mysterious occurences in Signos.


As the day draws to an end, Louie is also forced to resolve his long-standing conflict with his father who is now married to their servant, Cora (Irma Adlawan), a simple mystic. Ulding has refused all of Louie's invitations to stay with him in Manila because of his new family.


When the killings move closer to home and threatens Louie's family, he discovers for himself how he had been estranged from his roots and now must face his past with the horror of what is to happen.