"Banal" explores the secret lives of men in uniform 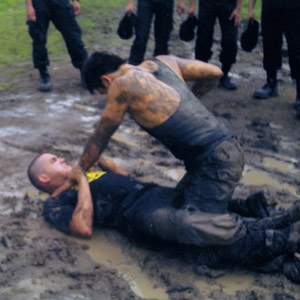 Alfred Vargas (back to camera) as Jason and Paolo Contis as Cris get down and dirty for a fight scene in Banal. This Metro Manila Film Fest entry is the directorial debut of Cesar Apolinario, reporter for GMA News and Public Affairs.


As a GMA-7 news reporter, Cesar Apolinario covers the police beat and he used this as the basis of his first feature-length film Banal. This Metro Manila Film Fest entry is based on true incidents involving the local police and tackles the personal crisis of SWAT members. Banal is the only digital film that will compete in the upcoming 33rd MMFF.

For his directorial debut, Cesar has tapped Christopher de Leon, Alfred Vargas, and Paolo Contis to help unravel the mystery behind the death threats against Pope John Paul II when he visited the country. It will be shown on New Year's Day, January 1, 2008.

SYNOPSIS. Cris (Paolo Contis) and Jason (Alfred Vargas) are two policemen with opposite personalities and philosophies—Cris is the epitome of the rare, near-extinct breed of honest cops while Jason is the basurero, the legman/front man who does the dirty work of his district's high officials.

Despite their contrasting natures, the two forge an unlikely friendship during their Special Weapons And Tactics (SWAT) training, a friendship born of conflict and competition, and bordering on brotherhood.

The unlikely architect of their friendship is Major Sagala (Christopher de Leon), their SWAT trainer. An alcoholic and once a basurero himself, Sagala sees in the two young cops the raw talent and skill that could make them the best force he has ever seen. A loner and an outcast, and despite his rough and tough exterior, Sagala finds the sons he never had in Jason and Cris.

Five years later, Cris is transferred from Cotabato to Jason's SWAT unit in Manila. His mother is in need of an operation unavailable in the province, prompting him to make the request. It is only then that Jason finds out that he is the godfather to Cris's son, and that the boy is also named after him. For the first time in his life, Jason feels the warmth of a family.

But Cris is a changed man. An encounter with a local politician in Cotabato has left him scarred physically and emotionally. His faith in the system he lived for has been replaced by a cynical hatred for the world.

As the Pope's visit to the country draws near, Jason and Cris uncover a plot to assassinate the Pontiff. For Jason, cracking this case would mean his ascension from a basurero to legitimate police official—until he finds out that the seemingly holy Cris is involved in the plot to kill the holiest man in the Roman Catholic Church.

As a bomb ticks its way to an explosive ending, the two men must confront each other in a deadly role reversal that will test their friendship.

Banal explores the unseen side of police work, stabs at the unscrupulous behavior of the media in everyday events, and shows an uncompromising picture of Philippine society. In today's world, angels can become demons, and sinners can become saints.


Click MORE PICTURES to view behind the scenes photos.