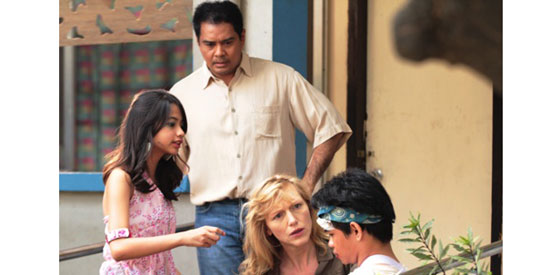 December 10 is celebrated worldwide as Human Rights Day. In relation to this, the European Union and Spring Film Foundation hosted a screening of Lilet Never Happened in Makati City.

In Lilet Never Happened, Dutch director Jacco Groen attempts to tell a true story without losing the audience in a “too serious” or “boring” documentary. Instead, it is a narrative that unfolds and engulfs us.

It is the story of a pre-teen girl who is forced into the sex trade by her mother who sells her daughter’s body and skills for a few measly pesos. Poverty is no surprise to us, we see children and adults eating on the sidewalks and living out of tiny houses every day. The movie also tackles the breakdown of social structures that could have otherwise helped people like Lilet and her mother and siblings.

The lead character of Lilet as portrayed by Sandy Talag is not your typical personification of a victim of child exploitation. She is sassy, headstrong, streetsmart, and a smart-ass. The movie, in true indie fashion, was filmed over the course of three years, within which Sandy made the striking transition from tween to teen.


Even though the former StarStruck Kids contestant underwent physical changes during the three-year period, surprisingly, it is not obvious on the big screen.

Direk Jacco employs some very inventive camera angles that provide a new perspective to the movie-viewing experience. The movie does not fall into the trap of melodrama. On the contrary, it takes us on a rollercoaster ride with some of the characters: their depths of sadness and heights of ecstasy. There are scenes that will move you to tears, but there are also scenes that will make you chuckle and laugh heartily. It is well-written by the team of Jacco and our very own Roy Iglesias.

The film’s gravely serious topic is somehow made more palatable by the treatment. The scenes are not all set in dingy corners and dark streets illuminated only by the city’s neon lights at night, but is equally sun-drenched during the day. Lilet is a person, after all, and not just a child in the world of adult entertainment.


The cinematography and camera work make gritty Manila seem almost beautiful. This, even in the scenes of tiny alleys with rows of makeshift houses and streets jammed with cars and people.

One wonders how the extremely young Sandy manages to play the role of a sex worker so convincingly. Her performance makes us feel sorry for Lilet but also infuriated at her hard-headedness, and yet, elicits feelings of empathy.

The narrative device of Lilet’s voiceover is otherworldly, as are some sequences that are surreal. The quality of her voice and the cinematography work to give the movie, in these scenes, an almost magical touch.

The editing is fast and the musical score is catchy. Sometimes, they are so effective that you might forget that you’re watching a movie dealing with a grim topic. The script is structured well, so that some cues or clues are left along the way, that revelations later on do not seemed force, but a result of natural progression.

The movie might be about Lilet, yet many of the characters are given extraordinary depth.


Angeli Bayani is impressive as the mother. She is feisty yet there is a desperation to her character and, sometimes, a degree of compassion for her daughter. It is also extraordinary how much she and Sandy resemble each other. This casting is perfect.

Johanna Ter Steege stars as the Dutch social worker Claire. She is also a three-dimensional character. She is concerned for Lilet’s welfare but, when push comes to shove, she is not above being cunning. There is an elegance in her acting and, when she steps out of the “concerned Caucasian” mold, she still maintains her grace. Her eyes are able to display a wide range of emotions.

John Arcilla portrays Claire’s husband. He matches her emotions with fierce passion, brimming over just above the surface before subsiding.

Marifee Necessito as Alice displays a range of emotions so vast that she almost overshadows her much younger co-star. She inhabits the character of a veteran prostitute so naturally.

Jermaine Patrick Ulgasan, as Lilet’s brother Dino, is amusing and cute, but also resists stereotype. He displays emotion so real and raw—making him another cast member who displays immense range for his age.


At the tender age of 15, Sandy won Best Actress in the Oaxaca International Film Festival.

After watching Lilet Never Happened, you walk out of the theater not with such a heavy, depressing feeling. Yet, you also walk out with a heightened sense of awareness of the problems plaguing our society.