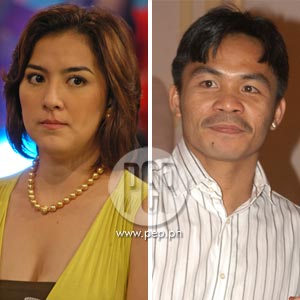 After months of not seeing eye-to-eye, Pinoy ring icon Manny Pacquiao and sexy actress Ara Mina were reunited for the shoot of their movie Anak ni Kumander.

In his column that appeared today in Abante Tonite, Abu Tilamzik spills the details regarding the much-awaited meeting between Manny and his co-star Ara Mina. Over the past months, the two have been favorite tabloid subjects due to reports that they're allegedly carrying an affair. Unfortunately, the rumor gave birth to other damaging issues, like Manny purportedly presenting Ara a new house, along with a luxury vehicle, as gift.

Ara has denied the issue incessantly while expressing disappointment at Manny for failing to comment on the issue.

The strain, according to Tilamzik, was still evident during the shoot last Saturday, November 10, prompting director Kaka Balagtas to personally coax the two stars to settle their differences for the sake of the movie.

Manny, of course, was then busy preparing for a boxing rematch against Mexican slugger Marco Antonio Barrera and was consumed by his training. Manny won the bout via unanimous decision last October 7 at the Mandalay Bay Hotel and Casino in Las Vegas, Nevada.

The man dubbed as the "Pambansang Kamao" also downplayed the rumor that he personally sought to pull Ara out of the project to quell the malicious rumor.

IN DEFENSE OF CRISTINE. Speaking in behalf of her sister, Cristine Reyes, Ara said that she was more affected by the confrontation issue that transpired between Cristine and ex-beauty queen Carlene Aguilar, allegedly over young heartthrob Dennis Trillo.

Ara revealed that Dennis send a text message and even called her personally to say sorry for Carlene's actions. Cristine, however, failed to answer directly if she accepted Dennis's apology.

Ara and Cristine would still push through with their plan to produce a movie, although they will not tap the services of Dennis anymore because, according to Ara, of work-schedule conflict.