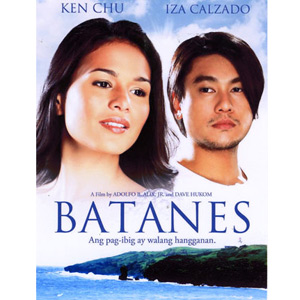 Pam (Iza Calzado) and Kao (Ken Zhu) are both characters with painful experiences in life. They get a second chance in love when they meet in the picturesque island of Batanes. Produced by Ignite Media and GMA Films, Batanes is directed by Adolf Alix Jr. and Dave Hukom.


At the farthest end of the archipelago, where the Pacific Ocean merges with the South China Sea, a Filipina develops a romance with a Taiwanese fisherman despite their language and cultural barrier—proving that, indeed, love knows no borders.

That is the premise of the Ignite Media and GMA Films presentation, Batanes, which will open in theaters nationwide starting December 5.

Directed by Adolf Alix Jr. and Dave Hukom, this 35mm film showcases the unique beauty of the island after which it is named. The Ivatan limestone houses, the breathtaking rock formations, and the gorgeous lighthouse of Basco and Sabtang islands serve as the backdrop for a love story between the headstrong Pam (Iza Calzado) and the gentle Kao (Ken Zhu).

Although the F4 member was unable to attend the press con of Batanes, which took place last November 13 at the GMA-7 compound, the media was shown a taped interview wherein Ken shared his thoughts about the island.

Ken was videotaped on a beach in Batanes and behind him was a spectacular view of the sunset. "I didn't expect Batanes to be so beautiful," said the F4 boy-band member. "You can call the place a paradise. And it's so near to Taiwan. It's so relaxing."

During the press con it was revealed that the Taiwanese superstar was supposed to act opposite another young superstar, Judy Ann Santos. Director Adolf admitted that he even approached Judy Ann during the first shooting day of Ouija in order to show her the script of Batanes. She would have loved to do the project but prior commitments prevented her from accepting the offer. But Judy Ann recommended her Ouija co-star Iza Calzado to fill in her shoes.

The GMA-7 star felt flattered that Judy Ann herself recommended her for the role. At the time, Iza was still waiting for confirmation whether or not she would reprise her role in the Hollywood remake of Sigaw. Fortunately, she was chosen to play the role of Gina, the wife of a policeman (played by Kevin Durand) in The Echo.


Iza managed to fix her schedule so she was able to star in Batanes and The Echo.

MULTI-LINGUAL KEN. In Batanes, Ken's speaking lines are mostly in Mandarin but off-cam, he is fluent in English, which is why the other cast and staff members had no problems communicating with him.

Regarding his role as Kao the fisherman, Ken says that it was a very big challenge for him. "It's my first time to play a role that requires a lot of body language, more than lines."

Communicating with others is not a problem for the Singapore-educated actor since Ken speaks English, Cantonese, Singlish, and a bit of Thai, Indonesian, and Japanese.

It was also revealed that the organizers originally didn't think of getting an F4 member to play a role in the movie. "We never planned to get Ken since we just wanted a Taiwanese actor. But Arleen [Cuevas, executive producer of the film] was able to get in touch with Ken and surprisingly, he replied that he liked the material."

When asked why he chose Batanes for the setting of his movie, Adolf pointed out that this is his second film to be shot in the northernmost province of the Philippines. "Mahilig akong mag-shoot sa lugar na mahirap puntahan. The place is very unique to the Philippines. It's like going to a different country. It can rival New Zealand [the setting of the epic movie Lord of the Rings].

SYNOPSIS. It was a whirlwind romance when Pam (Iza Calzado) meets Ivatan Rico (Joem Bascon) in Manila. She decides to give up her meaningless, stressful city life and follow him to Batanes to meet his parents Boy and Lydia (Bembol Roco, Daria Ramirez) and marry him.

The sea immediately intimidates Pam and shows its power, telling her how, with the strong toss of its waves, it can end everything. Pam tries to adapt to the Ivatan way of life. Pam starts hating the sea that Rico loves so much. Despite all these adjustments, Pam is happy with her new life and with Rico.

But everything changes when Rico does not return from fishing. Pam is devastated. She blames no one but the sea. Realizing that she cannot continue living in Batanes without Rico, Pam decides to leave. But before boarding the boat, she realizes that the sea is laughing at her defeat, so Pam decides to stay but she still cannot forget Rico.

On the anniversary of her husband's death, Pam sails to the Ivujos Island. She gets stranded on the island by an angry storm. She then sees a man lying face down in the sand. For a moment, she thinks it is Rico. But it turns out to be a Taiwanese, Kao (Ken Zhu). She administers to his wounds and brings down his fever. When the storm breaks, she drags Kao to her boat and takes him back with her.

The villagers are reluctant to accept the Taiwanese, especially Manuel (Sid Lucero) and Boy (Bembol Roco) since most Taiwanese fishermen fish illegally in the waters of Batanes. As Pam takes care of Kao, she starts to be drawn towards him. She starts to feel that he is a kindred soul. Language and cultural difference are no barriers as emotions rise. Love surfaces anew.

Batanes provides the breathtaking backdrop to their poignant love story. Will their love win over? Or will their past haunt them and eventually separate them?

Essentially a picturesque romance, Batanes also explores the intimate portrait of a woman's relationship with the ocean.

On November 28-30, there will be a special screening of the movie Batanes on the island itself. Meanshile, Ken Zhu will come back to the Philippines next month to promote the film, which will open in theaters starting December 5.