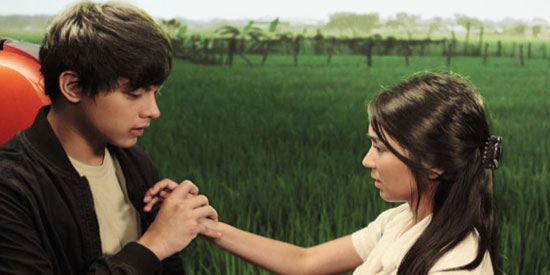 Starring Daniel Padilla and Kathryn Bernardo, MMFF 2013 entry Pagpag deserves the B rating it received for its evident technical merits.

Pagpag, Siyam na Buhay deserves the grade B it received from the Cinema Evaluation Board for its evident technical merits. The film’s appropriately grim and glossy cinematography arouses fear it wants audiences to feel. It is difficult to look away from the screen not only because of the brooding atmosphere but also because of the charismatic presence of Daniel Padilla and Kathryn Bernardo.

Daniel’s magnetic charm oozes right out from the screen. His role as Cedric, an angst-filled rebellious teen, was unfortunately not fully developed as it had to be sacrificed to spotlight his being a romantic lead to his onscreen partner Kathryn Bernardo.

Kathryn, as unbelievably young funeral parlor manager Leni, is able to show a balanced mix of strength and vulnerability.

Die-hard fans of the two will appreciate their banter during the first part of the film as it is reminiscent of their initial meeting in the TV series Got To Believe.

Pagpag’s plot twists, though filled with convoluted coincidences, are interesting to watch.

It helped that the movie’s storytelling process was rightfully unhurried. Unlike other Star Cinema movies where pertinent details are revealed or clumped all together in a single sequence, Pagpag exposed details all throughout one hour and forty-five minutes, resulting in an engaging and entertaining film.

Plus, the movie isn’t anxious to scare us or to let us know that it will. Scream-inducing scenes are placed strategically during unexpected moments, thus, adding to the unpredictability of the horror film.

There are light humorous moments spread throughout the movie. These moments (at times delivered by Janus del Prado who plays Leni’s relative Dencio) are effective in easing the tension as well as lull audiences to a comfortable mood until the next visual shocker.

The special effects seen in Pagpag are almost flawless. In one particular scene, Paulo Avelino’s character Roman floats in the air seamlessly.

Shaina Magdayao, as Roman’s wife Lucy, is both beautiful and creepy as his obsessed wife.

Philippine superstitions play a huge part in the believability movie. Director Frasco Mortiz managed to infuse Pinoy-style fear into the movie despite Pagpag’s similarity to Hollywood movies such as Final Destination and The Conjuring.

Pagpag, Siyam na Buhay is rated PG (Parental Guidance) by the Movie and Television Review and Classification Board. It is suited for teens, adults, kids with guardians and those who want to be scared this holiday season.