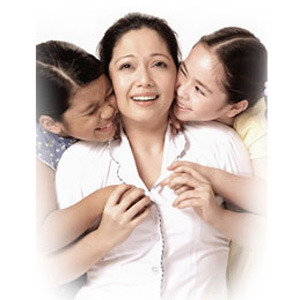 Maricel Soriano stars in Inang Yaya, an indie film about a nanny torn between her own daughter Ruby (Tala Santos, left) and her ward Louise (Erika Oreta, right). This Unitel Pictures movie represented the Philippines in the inaugural Asia-Pacific Screen Awards.

The Asia Pacific Screen Awards is a joint project of CNN International, United Nations Educational, Scientific and Cultural Organization (UNESCO) and International Federation of Film Producers Associations (FIAPF). It pays tribute to films and filmmakers from a constituency that produces half of the world's film output.

First-time directors Veronica Velasco and Pablo Biglang-Awa never expected their film to compete in international film festivals. Inang Yaya was meant to tell the tale of Velasco's own yaya and her relationship with the director's daughter and her own. As it turned out, the indie movie reflected a dilemma most Filipino mothers face when forced to work as a nanny for another child. After winning numerous awards locally, Inang Yaya is now being honored by the international film community.

SYNOPSIS. Norma (Maricel Soriano) is a nanny to Louise (Erika Oreta) in Manila. She is also a single-mom to Ruby (Tala Santos), whom she leaves behind under the care of her mother, Lola Tersing (Marita Zobel).

When Lola Tersing dies unexpectedly, Norma has no choice but to bring Ruby with her to Manila. Louise's parents (Sunshine Cruz and Zoren Legaspi) accept Ruby and even send her to the same school as their daughter. In spite of this set-up, Norma divides her time to both kids but does she divide her love between them as well? Will she choose Louise over Ruby?


The two agreed to the set-up since the responsibilities were then clearly divided between the husband-and-wife duo. They weren't thinking specifically of getting Maricel Soriano for the movie but when Mr. Gloria narrated the storyline of Inang Yaya to the veteran actress, Veronica Velasco found herself being asked by the Diamond Star, "Ang ganda ng treatment. Kailan natin gagawin ‘to?"


Maricel shared her acting expertise for the first-time actors and even changed some of the lines of the script, making them more suitable for the youngsters.

Inang Yaya is a Unitel Pictures production that is rated "A" by the Cinema Evaluation Board.
Read Next
Read More Stories About
Asia Pacific Screen Awards, Australia, indie
Post a Comment
Featured
Latest Stories
Trending in Summit Media Network