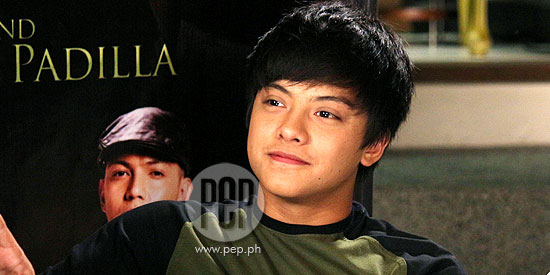 The year 2014 begins for teen star Daniel Padilla with the theatrical release of Sa Ngalan ng Ama, Ina, at mga Anak on January 29.

The action-drama flick, which was short-listed in the 2013 Metro Manila Film Festival but failed to earn a slot among the competing entries, will finally be screened nationwide after almost two years of filming.

Originally titled Kuratong Baleleng, the film depicts the life of the Mindanao mafia founder and leader, Octavio “Ongkoy” Parojinog, and his exploits as folk hero of Ozamiz, Misamis Occidental.

Before becoming controversial after its alleged involvement in a shootout with the police in 1995, the Kuratong Baleleng was an anti-communist, vigilante group—a theme that the Jon “Spongky” Villarin-directed film explores.

Although the story revolves around Robin Padilla who portrays Parojinog, the second generation of the Padilla clan takes on meaty roles in the film as well.

Daniel, together with his two brothers, Ralph Matthew and RJ Padilla (also Rommel Padilla’s sons), play the sons of Parojinog.

Kylie Padilla, Robin’s daughter, showcases her knack for action, having been trained in martial arts (thanks to her action star father) for the most part of her life.

In the film, Kylie portrays a deep penetration agent, or spy, who battles with the vigilantes.

The other Padilla belle, Bella Padilla, also shoots action sequences in the film.

Filming Sa Ngalan ng Ama, Ina, at mga Anak has been a fun ride for the second generation of Padillas.

Daniel said he feels lucky to be part of the project.

“Napaka-suwerte kasi habang nagtatrabaho kami, at the same time reunion [at] bonding,” he told PEP.ph (Philippine Entertainment Portal) and the other members of the entertainment press.

He added that if there’s anything that the film teaches, it is the value of family.

He recounted the scene where he was supposed to run towards a moving armored van.

The Got to Believe star revealed that he did his own stunts.

He related that he held guns and grenades, and the endless times they had to crawl and roll over the ground.

The experience was exciting, recalled Daniel.

When asked whether he feels more at home with the action genre or romantic comedy, Daniel replied that he has not quite figured it out himself.

The young actor said that he looks forward to exploring the depths of his acting skills.