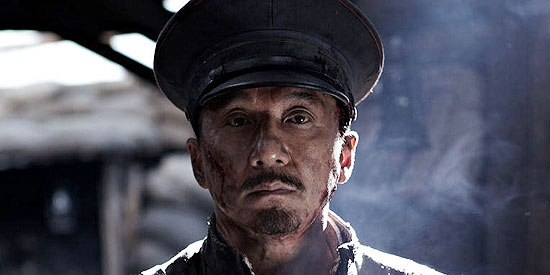 The historical action-drama 1911 Revolution stars Jackie Chan (in photo) as the revolutionary Huang Xing who leads an uprising against the corrupt Qing Dynasty. Together with the scholarly Sun Yat-sen, China’s would-be first president, Huang Xing and other nationalist/democrats put an end to the dynastic rule of China. The 8th Spring Film Festival also features Aftershock, Snowfall in Taipei, City Monkey, among four other Chinese movie

The 8th Spring Film Festival is slated to run from January 24 to February 2 at the Shangri-La mall Cineplex.

This year’s roster of Chinese movies engages an audience a wide range of themes from love and relationships, dreams, and revolution. If anything, they are films that Filipinos can connect with.

1911 Revolution, a historical action-drama, retells the significant Xinhai Revolution that crucially ended the dynastic rule in China and changed the country into a republic. The film grippingly accounts the series of revolts by the nationalist-democrats of China, led by the revolutionary Sun Yat-Sen, that triumphantly overthrew the corrupt Qing Dynasty. Jackie Chan stars in the 2011 film as the young Huang Xing who fresh off his studies on warfare in Japan, finds himself strategizing a rebellion with the brilliant Sun Yat-sen.

Aftershock recalls the devastating Tangshan earthquake which killed over 240,000 people in China back in 1976.

The film, directed by filmmaker Xiaogang Feng (The Dream Factory, Happy Funeral, World Without Thieves), tells the story of a mother who receives word from a rescue team that her twins—a boy and a girl—are buried under the rubble of the earthquake. Told that freeing both is impossible because the twins are buried too close to each other, the mother is forced to choose between the boy and the girl. Faced with the most unimaginable and painstaking dilemma in her life, the mother reluctantly chooses her son.

Later, the girl, Fang Deng, wakes and lives miraculously but has to live her whole life with the most painful memory of her mother choosing her twin brother over her.

City Monkey depicts the young adult He Zhiping’s obsession for parkour (“the art of movement”), also the sport that puts one through obstacles courses meanwhile getting past them by rapidly running, jumping, or climbing. It is usually done in an urban environment.

While highly-skilled at the sport, He Zhiping compromises his studies, which often gets him in arguments with his mother. At a crossroads, the 19-year-old has to decide between parkour and rethinking his future.

At the center of the mystery/drama Li Mi Conjecture is the female cab driver Li Mi in search of her former lover who she previously left behind due to her parents’s disapproval. Along the way, Li Mi is entangled in a murder case that leads her to a man reminiscent of her lover. Apart from Li Mi, four other characters—all strangers to each other—are eerily brought together by the case. As the plot unfolds, three stories on love, pain, and loss are tackled.

Let’s Fall in Love tells the story of Tan Momo, a musically-inclined young man who has everything going for him. His life changes when he gets hold of guqin, the Chinese 7-string, plucked instrument, and develops a skill at playing it. The music he creates from it allows him to experience the ups and downs of life.

The romantic drama Snowfall in Taipei follows the tale of May, a singer who leaves town after losing her voice. She leaves behind her producer and lover, Ah Lei. As she hides out in Jingtong, an old Taipei town, May crosses paths with the good-hearted Xiao Mo who helps her get back on her feet and pursue a different direction in life.

As made apparent by its title, The Go King and His Son follows the adventures of father and son, Liu Yishou and Xiaochuan, who are both excellent players in go or weiqi, a type of Chinese board game.

Unemployed and at the verge of losing his wife, Liu Yishou finds direction and hope upon learning that his son is a gifted go player. Together, father and son win games and overcome life’s challenges with the love and support of each other.

Where is My Home? is a film about people in their twilight years. Mrs. Geng just moved to the city to live with her adult son but finds herself displaced and alone. Her children later try to rebuild affection and ties as the film turns into a moving family drama.

The annual Spring Film Festival is organized by the Ateneo de Manila University’s Ricardo Leong Center for Chinese Studies, the Confucius Institute, the Embassy of the People’s Republic of China, Film Development Council of the Philippines, Credit Suisse, and the Ateneo Celadon.