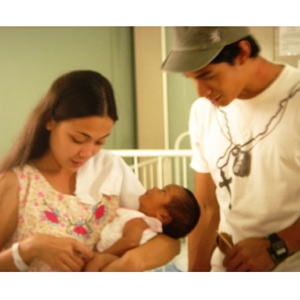 A sexually confused JB (Victor Basa) becomes a father figure to Tetta's (Jodi Sta. Maria) child in Maling Akala. This 2007 Cinema One Originals entry is a romantic comedy about deception and false pretenses.


From the creators of Inang Yaya comes this romantic comedy that dares to ask: Is the perfect man gay?

Co-directors Veronica Velasco and Pablo Biglang-Awa collaborate once again for the indie film Maling Akala, which is one of the finalists of the 2007 Cinema One Originals Digital Film Festival.

Jodi Sta. Maria-Lacson's co-star in Maling Akala is fellow Star Magic talent Victor Basa. Jodi plays Tetta, a salesgirl in a department store who gets pregnant by her boyfriend, who abandons her. She relies on the sexually confused JB (Victor) to act as her boyfriend and father of her child.

Veronica, who wrote the script of Maling Akala, chose Jodi for the female lead role because according to her, "Magaling naman talaga siya umarte. Ibang klase!" Jodi is currently married to Pampi Lacson, son of Senator Panfilo "Ping" Lacson. Jodi is also starring in another indie film titled Nars, which tackles the issues facing Filipino nurses.

Victor Basa, on the other hand, bested other actors for the part of JB. Veronica points out that she saw the characteristics of JB in Victor. He is currently one of the housemates in the reality show Pinoy Big Brother Celebrity Edition 2.

According to the two directors of Maling Akala, this movie was shot in five days with a budget of P1 million. Working around the given budget, Veronica rented her mom's house in Pampanga to serve as the set of the film.

Maling Akala, which is translated as "wrong assumption," was a product of a Bing Lao workshop taken up by Veronica. It tells the story of a young man's pressing homosexuality issues.

SYNOPSIS. Tetta (Jodi Sta. Maria-Lacson) is a department store salesgirl who gets pregnant by her boyfriend, who abandons her. She gives birth to a baby without a father. On her way home to the province to confront her parents, she sits besides JB (Victor Basa) on the bus.


The two strike a deal: JB, who is gay, will pose as Tetta's husband and the father of her child. Unknown to Tetta, JB's character is hiding more than just his sexuality.

As the story unfolds, some questions are raised: Are they really married? Does JB love Tetta? Are JB's intentions murderous? Will a gay man-straight woman relationship work?

A film full of twists and turns, Maling Akala illustrates the bittersweet truth of a homosexual story with a dark shadow.

Velasco and Biglang-Awa's Maling Akala is one of the finalists of the 2007 Cinema One Originals. The film will be screened from November 30 to December 2 at the Trinoma Mall, Quezon City, and at the Glorietta 4, Makati City.


The other digital movies of this year's batch: the tale about poverty Tambolista by Adolf Alix Jr.; the horror movie Altar by Rico Ilarde; the political thriller Confessional of Jerrold Tarog; and the OFW (Overseas Filipino Workers) melodrama Prinsesa of Lawrence Fajardo.


The films were produced by Creative Programs Inc. (CPl), one of the subsidiaries of ABS-CBN. The 2007 Cinema One Originals project celebrates its third year with an awards night on December 1 at the Grand Ballroom of the Renaissance Hotel in Makati at 7 p.m.

Trailer courtesy of Cinema One