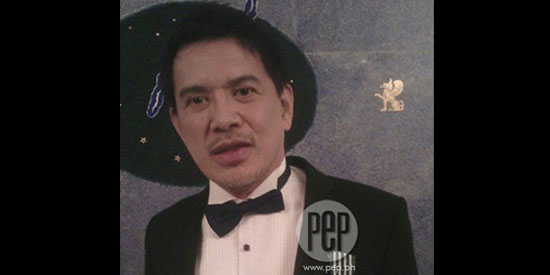 The Cannes award-winning director is inducted into the Order of Arts and Letters, which is considered one of France's highest awards.

It aims to recognize men and women, both French citizens and foreigners, for their significant achievements in the field of arts or literature.

The Order has three grades: Chevalier (Knight), Officier (Officer), and Commadeur (Commander) as the highest honor.

PEP.ph (Philippine Entertainment Portal) and other select members of the press were able to witness the formal event held at the residence of French Ambassador Gilles Garachon.

Guests from the diplomatic community and the filmmaking industry gathered to pay tribute to the first and only Filipino so far to receive the Cannes Best Director award for his 2009 entry Kinatay.

Direk Brillante first caught the attention of French moviegoers after the well-received commercial release of Foster Child in 2007.

This success paved the way for the Pinoy director to co-produce four films with Swift Productions of France: Serbis (2008), Kinatay (2009), Lola (2009), and Captive (2012), which starred Isabelle Huppert, one of France's most accomplished actresses.

"Tonight, we are gathered here to honor Brillante Mendoza. As an Ambassador, I must say that I am very humbled in front of Brillante because I think he is one of the best ambassadors abroad for the Philippines," said Ambassador Garachon, drawing applause from the small crowd.

In an exclusive interview with PEP, Brillante expressed his gratitude for being given this recognition.

How does he feel that he was described by Ambassador Garachon as "the best ambassador abroad for the Philippines"?

What was his initial reaction when he first found out that he would be inducted into the Order of Arts and Letters?

Some of the past inductees are famous personalities in Hollywood.

Brillante narrated that he previously witnessed a conferment ceremony in France, but little did he know that he would become the actual recipient of the insignia years later.

"Actually, naka-attend na ako ng ganito dati at may opisyal na nagsabi sa akin, 'You should be given this award in the future.'

FILIPINO KNIGHT. How does he feel about being called a Knight?

When PEP asked Ambassador Garachon for the main reason why they chose to induct Brillante into the Order of Arts and Letters, he pointed out, "Because he is a genius and he is an excellent director and he is a real artist.

"He is not only a filmmaker, he is an artist.

"In fact, he has a vision of life in the Philippines that is always interesting.

"The French people are in love with him and he is very much appreciated in France by French viewers and he is a commercial success in France.

"He is very famous there and I think he deserves a very good recognition. That is why we have chosen him for this distinction."

Another Filipino who was inducted recently was Film Development Council of the Philippines chairman Briccio Santos.

He was inducted into the Legion d'Honneur (French Legion of Honor) on October 24, 2013.

"I think Brillante is very original in the way he writes his stories and the actors in his movies are not acting; they are behaving.

"For example, he told me in Captive, he did not tell the actors beforehand what would happen.

"So the actors came to the set. They didn't know what was going to happen.

"They knew about the whole story but they did not know the scenario so they were acting naturally.

"When they had to show fear, they were really terrified.

"When you see the eyes of the actors, they were very genuine.

"I think because of the way he shows things, he is a genius."

JURY HEAD. Brillante has been chosen as the jury head in the upcoming Vesoul International Film Festival of Asian Cinema in France.

He is slated to leave on February 10 to attend the film fest that will run from February 11 to 18.